Are you ready to be transformed? Most people say they are, but when ‘push comes to shove’, they opt for the easy route, meaning doing nothing at all. This choice will not change anything, but it will succeed in making your life more difficult.

Many people going through transformations in these days recognize Pluto’s continual influence in bringing to light hidden motives and agendas. If Pluto can be equated to Set, or Satan, I think that his purpose is to purify our baseness by exposing it to Divine Light and Fire. David Wood, in his book Genisis, recognized that the union of a six-pointed star (hexagram) and a five-pointed star (pentagram) in the landscape near Rennes-le-Château created a seven-pointed star, thereby demonstrating the secret of the 7 Elohim or Creator-Gods.

7 The Typhon-Set: The sum of the female 3 and the masculine 4, the androgyne, the intermediate state of existence between the entities of spirit and the animal endowed with intelligence. This is Set, the Typhon, the serpent of Eden, Satan or Lucifer. He brought the light of intelligence into the animal and so created ‘thinking’ man. For this crime he was ‘cast down’ for 999 years. Those who have the ‘understanding’, meaning the biped animal, man, who have feet, hence 12, the equation is quite simple. The answer is in Revelation XIII, 18 for 666 with 12 ‘under’ or dividing it is 55.5 and it was with Isis (18) that this multiplication took place (55.5 x 18 = 999).

Plutarch (De Iside) confirms 7 and discloses the active principle of Set as 56: …that Typhon escaped out of the battle upon an ass after a flight of SEVEN days…even the Pythagoreans looked upon Typhon to have been of the rank or order of Demons producing according to them…the even number FIFTY-SIX…

The number 56 is easily understood when one appreciates the body of Set (7) and Isis (8) multiplied.

If my reading of the ‘secrets’ contained at Rennes and Atlantis is correct, man is faced with the ultimate ‘Catch 22’ situation. The Christian teaching casts Satan as evil, but his crime was to infuse an animal with intelligence, and we are the result of that crime. The simple way to rectify it would be for God to bring about the total annihilation of mankind, but this would constitute another crime, the destruction of a creature of intellect, which God would never do.

Can we blame our parents for our existence when the remedy is in our own hands?

Or have we unknowingly already made a decision which would release the ‘gods’ from their dilemma?

Are we, even now, creating the weapons and circumstances to bring about the ‘purification’ of the earth?

Isis, maligned by Christian doctrine, offers the only solution, elevation!

The Union of Opposites

Pluto in Virgo equals purification of the earth, and Isis combined with Osiris equals elevation of ‘earthly’ (i.e. evil) man.

Once again we find the image of small children, this time nursing at their mothers’ breasts. The nursing babe may be taken as a metaphor for the human, who having been born from the matrix of the unmanifest is still close to the nourishing power of the archetypal psyche. Individuation (entering the kingdom) brings the human ego into a state wherein this intimate closeness with the deeper sources of spiritual nourishment is re-established. The disciples misunderstood Jesus, interpreting his statement literally, so that a more explicit statement on his part is indicated.

The next portion of the saying demonstrates the intent of the metaphor more impressively. The union of the opposites within the psyche brings complete renewal, so that no portion within the human being remains unchanged. Introversion and extroversion, matter and spirit, good and evil, animus and anima having become welded into a new, indivisible unity; the person has become a totally new being and as such has entry into a kingdom of ultimate, numinous meaning.

The Star of Set 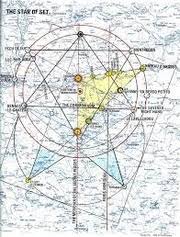 The Star of Set

What struck me as strange was how the phrase ‘an image in place of an image’ actually fits the concept of the union of a six-pointed star (‘the above as the below’) and a five-pointed star (‘the inmost as the outermost…’) creating the image of the seven-pointed star (‘make the male and the female into a single unity’) at Rennes-le-Château perfectly. But David Wood seemed a bit disturbed when he discovered the truth about our hybrid nature of spiritual being and animal body, and yet others have told us these things before.

For example, in Edgar Cayce’s Story of Jesus: Returning to Egypt, {the High Priest} Ra-Ta planned and erected two new temples for the development of the subhuman mixtures — The Temple of Sacrifice, which was both a spiritual and physical hospital or health center — and the Temple Beautiful, which was concerned with advanced training in vocation, especially in Art and Music.

The body was worshipped then as sincerely as most of the…spiritual worship today; for bodies were changing in form as their developments or purifications were becoming effective in the temples. These bodies gradually lost, then, feathers from their legs…many lost hair from the body, gradually taken away. Many began to lose their tails, or protuberances in various forms. Many paws or claws were changed to hand and foot, so that there might be more symmetry of the body. Hence…the body became more erect, better shaped to meet the various needs.

Those who had achieved such transformation, to be sure, were considered to have the body beautiful — beauty as something divine, for the divine has brought and does bring such various beauties of form or figure to the body; for “the body is the temple of the Living God”. (294)

Temple of the Stars

Temple of the Stars

And that last phrase puts it all into perspective: the image of the seven-pointed star is only a symbol of the truth. This is confirmed H.P. Blavatsky in Isis Unveiled: But if, following the ingenious exoteric description of the Bible, there are yet Masons who persist in regarding {the Temple of Solomon} as once an actual structure, who, of the students of the esoteric doctrine will ever consider this mythic temple otherwise than an allegory, embodying the secret science? Whether or not there was ever a real temple of that name, we may well leave to archæologists to decide; but that the detailed description thereof in 1 Kings is purely allegorical, no serious scholar, proficient in the ancient as well as mediæval jargon of the kabalists and alchemists, can doubt. The building of the Temple of Solomon is the symbolical representation of the gradual acquirement of the secret wisdom, or magic; the erection and development of the spiritual from the earthly; the manifestation of the power and splendour of the spirit in the physical world, through the wisdom and genius of the builder. The latter, when he has become an adept, is a mightier king than Solomon himself, the emblem of the sun or Light himself — the light of the real subjective world, shining in the darkness of the objective universe. This is the “Temple” which can be reared without the sound of the hammer, or any tool of iron being heard in the house while it is “in building.” 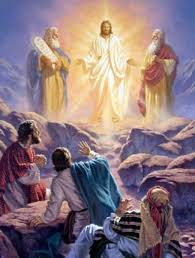 The significance of 7 shows up in several saying of Jesus, but I think the one about forgiving a sinful brother epitomizes his teachings well:

“If your brother sins, rebuke him, and if he repents, forgive him. If he sins against you seven times a day, and seven times comes back to you and says, ‘I repent,’ forgive him.” (Luke 17:3b-4)

Finally, the story of the Transfiguration in the Gospels appears to have been written by a science fiction writer, for its otherworldliness; but that may be the point exactly…

About eight days after Jesus said this, he took Peter, John and James with him and went onto a mountain to pray. As he was praying, the appearance of his face changed, and his clothes became as bright as a flash of lightning. Two men, Moses and Elijah, appeared in glorious splendour, talking with Jesus. They spoke about his departure, which he was about to bring to fulfillment at Jerusalem. Peter and his companions were very sleepy, but when they became fully awake, they saw his glory and the two men standing with him. As the men were leaving Jesus, Peter said to him, “Master, it is good for us to be here. Let us put up three shelters {sanctuaries} — one for you, one for Moses and one for Elijah.” (He did not know what he was saying.)

While he was speaking, a cloud appeared and enveloped them, and they were afraid as they entered the cloud. A voice came from the cloud, saying, “This is my Son whom I have chosen; listen to him.” When the voice had spoken, they found that Jesus was alone. The disciples kept this to themselves, and told no one at that time what they had seen. (Luke 9:28-36)

The transfiguration/transformation of hu-man into spiritual man is still under the reign of our free will. Either we choose to evolve or we reject that choice. From the beginnings of time, God has had a plan to save his/her creatures.

Evelyn Underhill, as quoted in Divine Light and Fire: Man is free and holds the keys to hell as well as to heaven. Within the love-driven universe which you have learned to see a{s} whole, you will therefore find egoism, rebellion, meanness, brutality, squalor; the work of separated selves whose energies are set athwart the stream. But every aspect of life, however falsely imagined, can still be “saved,” turned to the purposes of Reality: for “all-things hath their being by the love of God.” Its oppositions are no part of its realness; and therefore they can be overcome.

To “Bring Eternity into Time,” the “invisible into concrete expression”; to “be to the Eternal Goddess what his own hands is to a man” — these are the plainly expressed desires of all great mystics. One and all, they demand earnest and deliberate action, the insertion of the purified and ardent will into the world of things. The mystics are artists; and the stuff in which they work is most often human life…

It seems that the ‘artists’ who created the Temple of Solomon image at Rennes-le-Château took the concept of transformation of the human into the divine and made it a manifestation of the conjunction of Jupiter and Saturn, the subject of our next chapter.