To Everything There is a Season

When we were young, we thought that we’d work forever, or at least as long as our health held out. But then there comes a time to lay the burden of work down. For me, the time is now.

You probably know this scripture as the basis for Pete Seeger’s song “Turn Turn Turn”. In fact, you may only know his words, and not the original, so let’s start with the biblical quotation.

I feel that these words are a proof of sorts that Astrology is real, and that the timing of events can be predicted, and thereby accepted as they occur.

On Friday of this past week, the world woke up to a solar eclipse. Not every part of the world could see it in its entirety, but most people in Europe were able to catch glimpses of it through the clouds. In fact, I found this moody photo on Facebook.

Most of the time, eclipses happen (at least twice a year) without much attention paid to them, but this one was different for a couple of reasons.

Firstly, it was a ‘supermoon’.“A supermoon is the coincidence of a full moon or a new moon with the closest approach the Moon makes to the Earth on its elliptical orbit, resulting in the largest apparent size of the lunar disk as seen from Earth. The technical name is the perigee-syzygy of the Earth-Moon-Sun system. The term “supermoon” is not astronomical, but originated in modern astrology.” (Wikipedia)

Secondly, it came on the Spring Equinox, the first day of the astrological new year. “An equinox occurs twice a year, around 20 March and 22 September. The word itself has several related definitions. The oldest meaning is the day when daytime and night are of approximately equal duration. The word equinox comes from this definition, derived from the Latin aequus (equal) and nox (night).” (Wikipedia)

If anything, this bodes well for the world, because it implies a new beginning. 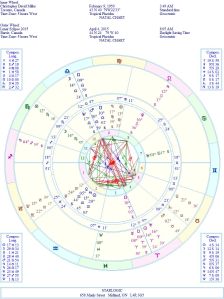 When I erected the chart for the Solar Eclipse 2015, I was surprised to see that the North Node and South Node of the chart were in the opposite positions of my birth Nodes. That set me to thinking. Is this somehow significant?

You see, Astrology for me is not a hard and fast rule to be applied to my life. Most of the time, I don’t even refer to it, as far as my life is concerned. I let things come and then let them go, without wondering if there is a cosmic counterpart to the event.

Well, I’m here to tell you that there is proof of a season for everything, and it would seem to be the Moon’s Nodes in my chart, as far as my working life is concerned. To see more on these Nodes follow this link: http://astrostyle.com/learn-astrology/north-south-nodes/

The implication is that my work is done, and it is now time to make sense of it all.

The Rest is Easy

We work hard, our whole lives, to achieve ‘success’, but in the end, we are set aside by the working world when we reach the milestone of retirement. It’s time to let the younger generation pick up the load and carry it for awhile.

I wasn’t sure I could afford to retire, thinking that as long as my mental functions were healthy, I could just carry on. But I wasn’t counting on how tired of the process I’d become. In truth, I’ve had enough of being under someone else’s thumb. I just want to lay in the sunshine like our dogs do.

Will it be difficult? No, it will be easy.

So let’s celebrate by singing along with the Byrds.

I am an Astrologer who also writes about world events. My first eBook "At This Point in Time" is available through most on-line book stores. I have now serialized my second book "The Star of Bethlehem" here. And I am experimenting with birth and death charts. If you wish to contact me, or request a birth chart, send an email to cdsmiller17@gmail.com
View all posts by cdsmiller17 →
This entry was posted in history, personal and tagged astrology, eclipse, retirement. Bookmark the permalink.