It was bad enough that Malaysia Airlines MH370 disappeared over the South Indian Ocean, shrouded in mystery. Then, a few months later, another plane is shot down. What’s going on? 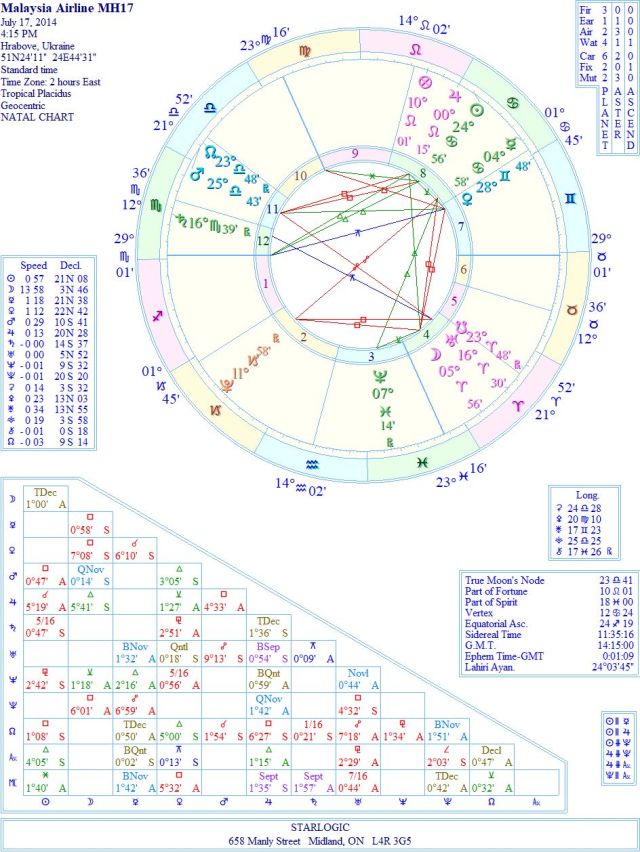 Malaysia Airlines Flight 17 was a scheduled international passenger flight from Amsterdam to Kuala Lumpur that crashed on 17 July 2014. It is believed to have been shot down with a Buk surface-to-air missile. The aircraft went down near Hrabove in Donetsk Oblast, Ukraine, about 40 km (25 mi) from the Ukraine–Russia border. All 283 passengers and 15 crew on board the Boeing 777-200ER airliner were killed. The crash occurred in the conflict zone of the ongoing Donbass insurgency, in the area controlled by pro-Russian rebel groups. (Wikipedia)

My Analysis (for “Other Points in Time”)

Does lightning strike twice? If you owned Malaysia Airlines, I would bet that you believe so. Having two aviation incidents happen in the same year to one airline company is unheard of in this day and age. Who have they pissed off?

That thought takes me back to a discussion an astrology class once had. The instructor asked, “What would you say to a person who had a Mars/Uranus conjunction?” I answered, without thinking, “Have you been struck by lightning?” To which, the instructor exclaimed, “Right! How did you know that?” It’s simple, really: Mars represents accidents; Uranus rules sudden events. What could be a more sudden accident than a lightning strike?

A surface-to-air missile, like the Buk rockets considered the most likely reason for this crash, is as quick as any lightning strike. Therefore, the main focus of this chart should be on an aspect between Mars and Uranus. And there is one: Mars is in opposition to Uranus. Although the angle is not exactly 180°, the effect would be sufficient to cause an unforeseen, sudden accident.

I’ve concentrated on the Mars aspects because Mars is the ‘soldier’ in the chart. It is my belief (even at this early stage in the game – July 20th) that this accident was caused by a soldier on the ground; but from which side of the conflict? There have been reports from a Spanish air traffic controller working in Kiev that Flight MH17 was being escorted by Ukraine air force planes until a few minutes before the Malaysia Airlines plane disappeared from the radar screen. Is it possible that the plane was manoeuvred into a vulnerable position, and then abandoned to its fate, or worse, did the Ukraine armed forces do the job themselves, so they could lay the blame for its destruction on the Russia-backed militants, and therefore, on Russia itself? One has to remember that the focus this year, so far, has been on vilifying Vladimir Putin. Are the ‘hawks’ in the American government gunning for Russia? It would seem so.

I am an Astrologer who also writes about world events. My first eBook "At This Point in Time" is available through most on-line book stores. I have now serialized my second book "The Star of Bethlehem" here. And I am experimenting with birth and death charts. If you wish to contact me, or request a birth chart, send an email to cdsmiller17@gmail.com
View all posts by cdsmiller17 →
This entry was posted in history, manuscripts and tagged Air Crash, Mysterious events, Russia, Ukraine, war. Bookmark the permalink.