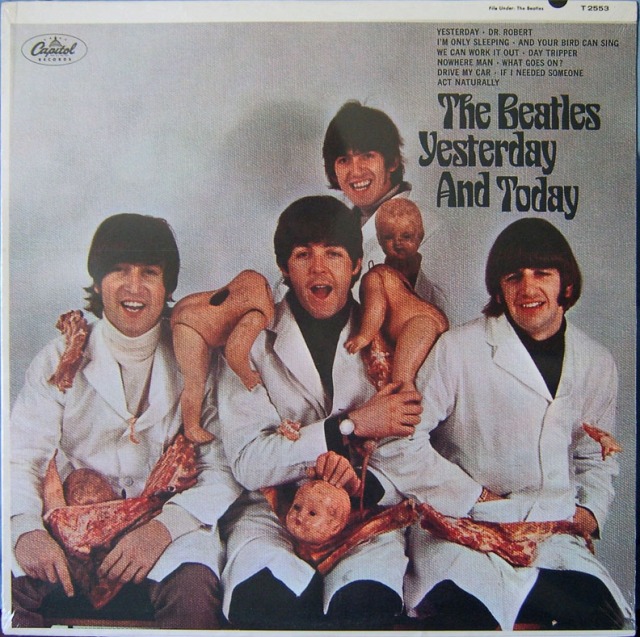 The ‘holy grail’ of Beatles’ collections, this album is a much sought after item. Grotesque, to be sure, it also demonstrated the Beatles’ collective sense of humour. They were protesting in a very visible way that Capitol Records were butchering their babies (records) by leaving one or two off earlier albums and then making a ‘new’ album featuring Yesterday and other songs. The “Today” part was the obvious lie.

I got a ‘peeled’ copy in 1980. It was a little patchy, but mostly intact. However, there was no album, so the used record store threw in a mint copy of the “Trunk” cover version to compensate. 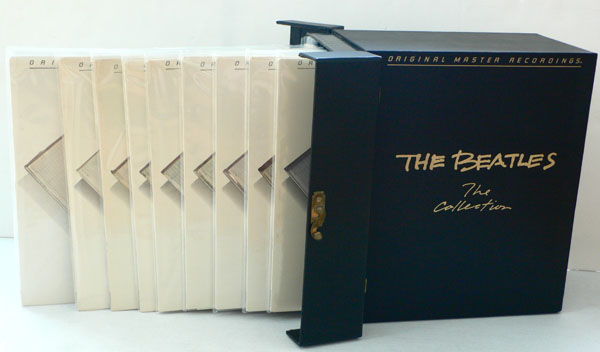 This is how this collection looks now, but the original box in 1980 was more like the one that houses the Beatles’ collection in their original EMI album covers, with the top opening out to allow access, instead of the side shown here.

The long and winding road of how I lost, found and lost this collection again might be a story for another day. I played them once, recording their sound onto a dozen cassettes, which I still possess. My best purchase, ever.

This album isn’t as special now as it seemed at the time in 1970 when it was released. The Beatles used to send out flimsy 45 rpm acetates to their fans every Christmas. Capitol Records just copied them onto a master and issued this album when it appeared that the Beatles gravy train was coming to an end.

Let’s face it: I’m a sucker for ‘special’ box sets. This one boasted improved fidelity over our ‘normal’ pressings. I also liked the fact that it was from Japan. I needn’t have bothered.

One of my last albums was this one from Spain. It didn’t have any other value than it was a foreign language title I found in Canada. 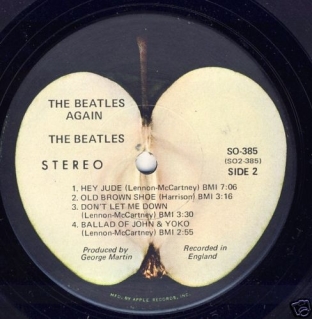 This one was a surprise find. Hey Jude came out on Capitol Records around the same time that the Beatles were breaking up. They must have changed their minds about the title because the LP inside was labeled The Beatles Again. These songs were essentially issued on 45s only by EMI. Again, Capitol was capitalizing on the public’s insatiable need for ‘new’ records, by recycling old ones.

The Day the Music Died

When John Lennon was assassinated in 1980, I stopped collecting Beatles’ albums. But of my more than 500 albums that I had in my collection at that time, 125 were Beatles’ albums. This seems impossible since they only released 13 original albums (and a load of 45s) with EMI

But I first collected their albums as they were released by Capitol Records here in Canada. Then I got the American versions. Finally, I bought the imported EMI ones. It doesn’t take long to amass a fair number over a span of 15 years or so.

Do you need proof?

My daughter Rosanna, as a young audiophile

I am an Astrologer who also writes about world events. My first eBook "At This Point in Time" is available through most on-line book stores. I have now serialized my second book "The Star of Bethlehem" here. And I am experimenting with birth and death charts. If you wish to contact me, or request a birth chart, send an email to cdsmiller17@gmail.com. (And, in case you are also interested, I have an extensive list of celebrity birth and death details if you wish to 'confirm' what you suspect may be a past-life experience of yours.) Bless.
View all posts by cdsmiller17 →
This entry was posted in personal and tagged albums, beatles, collections, LPs, music. Bookmark the permalink.

3 Responses to My Beatles’ Record Collection