In May 2010, Susan and I married. As we’d both been through marriages and other relationships before, most people would say that this act was one of ‘hope overcoming experience’. That would be true if we’d met in our later years, as it would seem. However, the truth was we first met in 1966, and hit it off right from the start.

But life sometimes gets in the way, whether it is fulfilling other obligations or because one has misread the signs: to make a long story short, we remained friends for more than 40 years (the last 20 of them while not being in touch), finally catching up with each other in 2007 via a classmates website.

My plan had been to move back to Canada from England in that year, so I set in motion the wherewithal to do that. Within a month of starting the process, Susan found my profile on the North Collegiate web page and sent me a message. To say I was knocked out by the ‘coincidence’ would be an understatement. We started emailing regularly from then on for the next few months.

In August of 2007, I came to Canada for the first Miller family reunion. Susan accompanied me. It was such a success, I knew we were meant to be together. So, when I finally returned to Canada in October of that year, we moved in together. The rest is history.

This coming week, Susan will be reaching a significant milestone, so I’m writing this blog to honour her. I couldn’t have asked for a more special person in my life to be my friend, my lover and my wife.  Happy birthday, Susan. 143 xo

(The cartoon version of our wedding picture was produced by my daughter, Rosanna’s husband, Ross.) 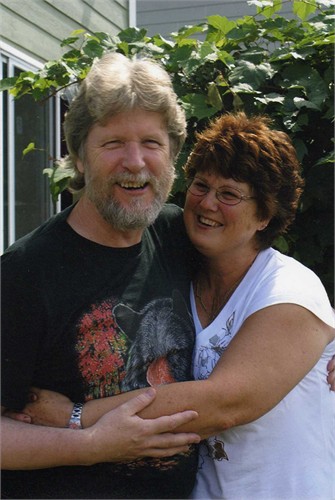 I am an Astrologer who also writes about world events. My first eBook "At This Point in Time" is available through most on-line book stores. I have now serialized my second book "The Star of Bethlehem" here. And I am experimenting with birth and death charts. If you wish to contact me, or request a birth chart, send an email to cdsmiller17@gmail.com
View all posts by cdsmiller17 →
This entry was posted in family and tagged friendship, love, marriage, relationships. Bookmark the permalink.

2 Responses to My Wife