A Son’s Letter to His Mom

Well, it must be that time of year again, only this time I haven’t just read about things, I’ve actually gone out and done something about it. What? I hear you ask… Cathars, that’s what!

For years, I’ve been reading about them in Arthur Guirdham’s books (The Cathars and Reincarnation, We are One Another).

I have identified some of the people I know (Kate, one of my clients, Von) as having been Cathars, but my “direct” knowledge has been limited to the image of the circled equal-arm cross, known as Part of Fortune in Astrology and as Earth in Astronomy. (You would see it as a Celtic cross, but its outer arms are not fluted, if that’s the right word to use.) 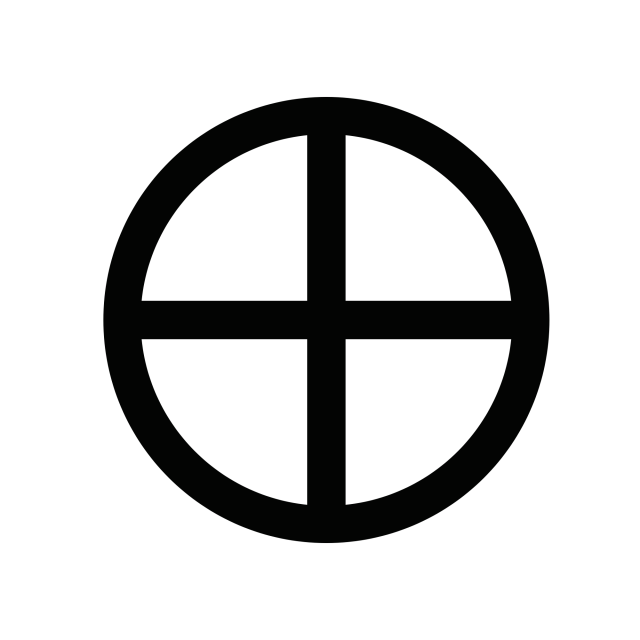 After meeting Kate, I decided to get two of these symbols made as pendants, because I couldn’t find one anywhere. The image has been so strong that I knew it was important but I didn’t know why. Then I came across a drawing of it, in Guirdham’s book. It was a coin or something.

Well, that opened up my awareness, which, for the last five years or so, has stayed opened up, but, so far, it hasn’t given me anything substantial to go on. I had to wait until an opportunity presented itself, as always.

That opportunity took the form of an invitation (to anyone and everyone in our Wednesday night meditation group) from Anna, to visit her house in Northern Spain, near the Costa Dorado on the Mediterranean.

Morwenna, also in our group, decided to make the trip, on her own if necessary, and I offered to go along as second driver, thus cutting the costs in two. I think everyone was shocked, to say the least, because I’d declined to leave this country for anything (but mostly, I admit, to avoid travelling with Sue). But little by little everyone got used to the idea, including Dammy, who wished she’d thought of the idea first.

On the meditation night, 1st April [1992], I asked Dammy to see if she could use her “far vision” to see if I had a connection with the Cathars: her vision is attached.

As I read it, the next day, I felt it to be a true and accurate record of a few of the events of my life as a Cathar, but couldn’t “see” for myself. 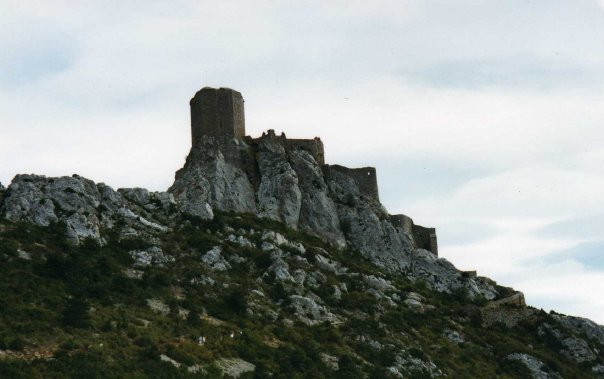 However, two interesting facts from my childhood seem to have a connection with this vision: one, my difficulty working in the sun and the heat. (Remember the debacle of my trying to work as a pruner of Christmas trees, and my feeling so sick after only two says in the sun? Also, I always felt nauseous after cutting the grass.); secondly, my difficulty with (actually an allergy to) pine tar. I see that as a residue of the wood (and pitch) used to burn the Cathars. Anyway, some interesting questions from my childhood were “solved”.

But that’s not all, there’s more…

The plan of our trip to Northern Spain would take us directly through Cathar country in the South of France, so Morwenna and I planned to visit some of the well-known sites, including Montsegur, where on the 16th March 1244, over 200 Cathars were burned as heretics by the Crusaders on behalf of the Roman Catholic Church.

On the 13th of April, Morwenna and I set out with her car, crossing over to France via the Plymouth-Roscoff Brittany Ferry route (Amy’s favourite way) and taking three days to get to the Languedoc region of France.

All was sunny and bright when we arrived on the Wednesday evening (15th), but when we woke up the next morning, there was a dusting of snow on the mountains surrounding Quillan. By mid-April in the South of France, one does not expect to see any snow, but I guess the Universe had a reason…

So we set out, stopping for a time at a ruined/partially restored chateau at Puivert. Then on to Montsegur. 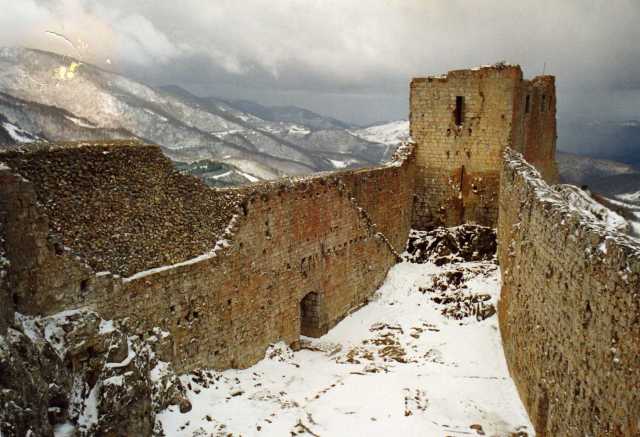 It was overcast when we got there, and the snow was quite thick on the ground, which made our ascent very fraught, but we hadn’t travelled all the way from England to be stopped at the last minute by a mere snowstorm!

It took us about half-an-hour to scale the heights, which is quite steep in parts, and the path was completely unmarked, unless the marks were underneath the thick snow. I had to stop twice to catch my breath and still my pounding heart.

At one point, Morwenna led towards the left, closer to the summit, and I knew immediately that she was going the wrong way, so I told her to try this other path (of semi-loose rocks). My advice turned out to be correct, which made me “see” that I’d been there before.

At the top, the wind blew through the fortress, but I felt at peace, knowing that we’d done it! From the rampart we took half-a-dozen photographs, and then went for a short exploration around the outside of the walls.

Suddenly, I heard a voice inside say, “You’ve done enough, it’s time to go.” So I told Morwenna, and she agreed that we should descend immediately. Others were on the way up, when we made our slippery way back down, and we passed them, wondering why we’d been instructed to leave. About half-way down, it became obvious, because it began to snow. By the time we reached the bottom, the snowstorm had turned into a blizzard, and those poor people, now at the top, were without any vision of the surrounding landscape, because when we looked back up, the whole mountain was obliterated.

We then drove to Ax-les-Thermes, via a mountain pass, and then back to Quillan, via two mountain passes, which were snow-covered and slippery, and the Plain in-between had two-to-three foot snowdrifts across the road. Even though the car had no snow tyres, I drove through all of this with a quiet sort of confidence that we would get back safely.

It was during this trip that I realised for sure that I’d lost my usual “fear” pattern. My stomach hadn’t felt queasy, and I knew we were in the Universe’s hands and protected from all harm. Like the poem says, it’s the journey not the destination that counts. A great releasing experience!

So you can imagine how good I’m feeling now. We continued the trip to Anna’s place, near El Perello, south of Tarragona, arriving there in the evening of Good Friday, staying over until Easter Monday morning.

The trip back took just two days, and money-wise and petrol-wise, we were under “supervision”, never running out, but coming very close. We caught the ferry back to Plymouth of the 22nd of April. The whole trip cost us £200. each. What an adventure!

Now, I’ve made an assumption that you know what I’m writing about, but just in case you need to do some research, here are a few hints: The Roman Catholic records refer to the stamping out of this heresy of the Bonhomme as the Albigensian Crusade.

They (the Cathars) had a dualist tradition based upon the Gnostic beliefs, which can be summed up in a quote from Job 9:24:

“The earth is given into the hand of the wicked; He covereth the faces of the judges thereof; if not, where and who is He?”

They held the gospel of St. John the Divine to be the only true gospel. And they only had one major sacrament which was known as the consolamentum. This was usually not administered until just before the person was to die, as the vow was to live the rest of one’s life, purely (i.e. without contact with the opposite sex). Only the perfected one, the Parfait, took this vow long before their life’s end, and they took on the role of Bishops, both male and female. [Very enlightened, I’d say…]

Anything else? Not that comes to mind right now, but I would just like to remind you that I’m enjoying this journey, thanks for being there right from the start.

I am an Astrologer who also writes about world events. My first eBook "At This Point in Time" is available through most on-line book stores. I have now serialized my second book "The Star of Bethlehem" here. And I am experimenting with birth and death charts. If you wish to contact me, or request a birth chart, send an email to cdsmiller17@gmail.com. (And, in case you are also interested, I have an extensive list of celebrity birth and death details if you wish to 'confirm' what you suspect may be a past-life experience of yours.) Bless.
View all posts by cdsmiller17 →
This entry was posted in personal and tagged Cathars, Gnosticism, history, spirituality. Bookmark the permalink.

2 Responses to A Son’s Letter to His Mom