Would You Bet on a Sure Thing? 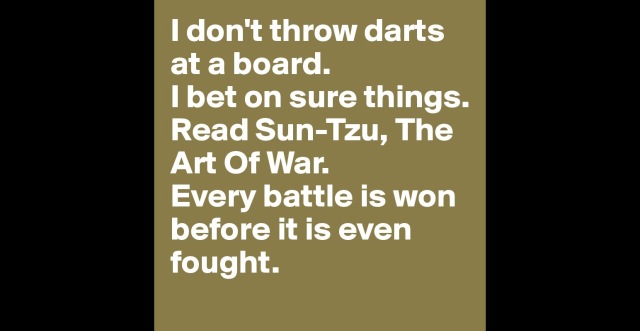 As far as my dreams go, it was a strange one. I had joined forces with an old friend from the early 1980’s. She had a team of workers who seemed to be recruiting new candidates from unexpected sources. She found me, after all these years and got me to enlist.

I did so gladly.

What happened then was that another team challenged me to a fight. It would definitely be a lopsided contest. Their guy was skilled and fit; I was not.

I asked my friend why she had chosen me for this bout. Her answer surprised me: she said, “They will put all their money on their fighter because it looks like a sure win for him.” Even in my dream, I got the hint.

Because I seemed so under-prepared, it appeared that I would likely lose the fight. What my friend was attempting to do was bait the competition into thinking that they couldn’t lose. Then, because I had skills that were not ‘obvious’, I would be victorious in the end, and she would win.

Then I woke up. The dream had lasted all night. It was a ‘lucid’ dream

Nothing is certain in life. Even the down-trodden and ‘useless’ can surprise you. If you think something is a ‘sure thing’, think again. You might be wrong.

Evelyn knew that she had won this battle with her competition before it had been fought.

The lesson is there for the taking.

I am an Astrologer who also writes about world events. My first eBook "At This Point in Time" is available through most on-line book stores. I have now serialized my second book "The Star of Bethlehem" here. And I am experimenting with birth and death charts.
View all posts by cdsmiller17 →
This entry was posted in personal and tagged betting odds, dreams, fighting fit, inspirational words, lucid dreaming, motivational thinking. Bookmark the permalink.