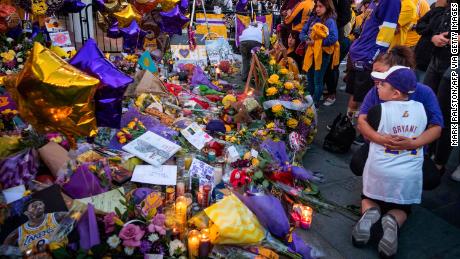 I waited a week before attempting this post. As I’m not a big basketball fan, this accidental death of one of the NBA’s biggest stars didn’t affect me as much as it did others. The tributes (shown above) rival Diana’s in heartfelt sentiment, but may never be able to match the volume after her death in 1997. Kobe was no People’s Princess.

Kobe’s birth time is a ‘best guess’ based on a birth announcement from August 1978. No one can find the source, now, but the energy in his chart seems to fit. (Other astrologers have posted what it all means, so my suggestion is that you read their posts, if you’re curious.)

My focus, as always is on the Accident chart, to see if there are ties with his birth chart.

The timing of the accident is sometime around the loss of the helicopter from radar screens. As always, a Finger of God  (Yod) shows up which confirms both charts. But even better, there are two Yods: both involve the natal Saturn Inconjunct the ‘fatal’ Ascendant.

With this aspect you probably have a rather serious attitude toward life and other people. It may be quite difficult for you to simply go out and have a good time. You want to be serious and to spend all your time performing significant tasks. This attitude may have developed because you were discouraged from enjoying yourself when you were younger. You may have been made to feel that only work is important, that play serves no useful purpose. This is not true, however, because playing has a positive and useful function in the development of the adult mind and body. Not only does it serve to release tensions, but it also actually helps train you in social and physical skills that will be useful in any work you do later.

Very interesting, of course, but not strictly speaking prophetic.

The ‘exact’ conjunction of his natal Neptune with the ‘fatal’ Mars is what caught my eye.

This is a very peculiar transit and is usually accompanied by strange feelings. You are likely to feel extremely irritable and itchy without quite knowing why. And at the same time you may feel discouraged and incapable of doing anything useful. Feelings of weakness and inferiority are quite common with this transit, the result of Neptune’s ego-denying quality in conflict with the essentially egoistic nature of Mars. It is best not to take these feelings too seriously.

You should be careful to avoid any kind of Neptune-dominated activity during this period, including actions that are ill-thought-out or based on personal delusions rather than on facts. Make sure that you know what you are doing under this transit. Better yet, don’t start anything new, except for the kinds of activities mentioned below [but not included here]. Also you should be careful of people who appeal to you through your favorite ideals or delusions and then take you for a ride. Your delusions may be the basis of someone else’s success.

I’ll leave the final words to Kobe Bryant, himself.

I am an Astrologer who also writes about world events. My first eBook "At This Point in Time" is available through most on-line book stores. I have now serialized my second book "The Star of Bethlehem" here. And I am experimenting with birth and death charts. If you wish to contact me, or request a birth chart, send an email to cdsmiller17@gmail.com
View all posts by cdsmiller17 →
This entry was posted in history, showbusiness and tagged accidents, astrology, athletes, basketball, legends, superstars. Bookmark the permalink.