Star: 13 – Midheaven: The Star of Heaven

What is the point of overcoming the world if you cannot return ‘home’ to share your insights with family and friends? In Jesus’ birth chart, the Midheaven is in Cancer, the symbol of the universal Mother.

Jesus Appears to the Disciples after his Death

While they were still talking about this, Jesus himself stood among them and said to them, “Peace be with you.”

They were startled and frightened, thinking they saw a ghost. He said to them, “Why are you troubled, and why do doubts rise in your minds? Look at my hands and my feet. It is I myself! Touch me and see; a ghost does not have flesh and bones, as you see I have.”

When he had said this, he showed them his hands and feet. And while they still did not believe it because of joy and amazement, he asked them. “Do you have anything here to eat?” They gave him a piece of broiled fish, and he took it and ate it in their presence.

He said to them, “This is what I told you while I was still with you: Everything must be fulfilled that is written about me in the Law of Moses, the Prophets and the Psalms.”

Then he opened their minds so they could understand the Scriptures. He told them, “This is what is written: The Messiah will suffer and rise from the dead on the third day, and repentance and forgiveness of sins will be preached in his name to all nations, beginning at Jerusalem. You are witnesses of these things. I am going to send you what my Father has promised; but stay in the city until you have been clothed with power from on high.”

When he had led them out to the vicinity of Bethany, he lifted up his hands and blessed them. While he was blessing them, he left them and was taken up into heaven. Then they worshipped him and returned to Jerusalem with great joy. And they stay continually at the temple, praising God. (Luke 24:36-53)

Do the numbers add up?

The Appearance at Sychar

For a very long time, I have wondered about the numbering system of the New Testament. We have already explored a great many things to do with numbers, both obvious — as in narratives and parables — and hidden — as shown by sacred geometry and cabalistic coding. But what about the numbers of the verses of the Gospels? Many times I have noted that a particular passage is in ‘such-and-such’ a chapter, from verse ‘so’, to verse ‘so’. This passage, relating to his last visit to the disciples after his resurrection, and concluding with his ascension, seems to be hinting at something in the numbering of the chapter and verses. The chapter is number 24. We saw, in Jesus’ birth chart, that the North Node is at 24° Aries. 24 is 2 x 12, 3 x 8, 4 x 6; all significant numbers. And this passage begins at verse 36, which is 2 x 18, 3 x 12, 4 x 9, also all very significant. But the final verse number clinches it for me: 53… Remember that the “abomination which causes desolation” was coded as 503 x 7, with a total value of 11, showing division/creation; and the statement from Revelation that Jesus spoke to St. John the Divine, “I am the Alpha and the Omega, I am the beginning and the end” was coded as 503 x 8, with a total value of 10, showing communion/wholeness. Isn’t it strange that this final verse also has the digits 5 and 3? Well, isn’t it? We need not restate what those numbers and their sum (8) relates to, but I know Truth is contained therein.

The Parable about the Talents 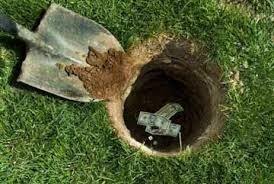 Burying the One Talent

“Again, it {the kingdom of heaven} will be like a man going on a journey, who called his servants and entrusted his property to them. To one he gave five talents of money, to another two talents, and to another one talent, each according to his abilities. Then he went on his journey. The man who had received the five talents went at once and put his money to work and gained five more. So also, the one with the two talents gained two more. But the man who received the one talent went off, dug a hole in the ground and hid his master’s money.

“After a long time the master of those servants returned and settled accounts with them. The man who had received the five talents brought the other five. ‘Master,’ he said, ‘you entrusted me with five talents. See, I have gained five more.’

“His master replied, ‘Well done, good and faithful servant! You have been faithful with a few things; I will put you in charge of many things. Come and share your master’s happiness!’

“The man with the two talents also came. ‘Master,’ he said, ‘you entrusted me with two talents; see, I have gained two more.’

“His master replied, ‘Well done, good and faithful servant! You have been faithful with a few things; I will put you in charge of many things. Come and share your master’s happiness!’

“His master replied, ‘You wicked, lazy servant! So you knew that I harvest where I have not sown and gather where I have not scattered seed? Well then, you should have put my money on deposit with the bankers, so that when I returned I would have received it back with interest.

“’Take the talent from him and give it to the one who has the ten talents. For everyone who has will be given more, and he will have an abundance. Whoever does not have, even what he has will be taken from him. And throw that worthless servant outside, into the darkness, where there will be weeping and grinding of teeth.’” (Matthew 25:14-30)

To me this is a parable about reincarnation and karma, where we are given talents (abilities) at the start, and when our lives are finished (when the grim reaper calls us home), we have to account for what we have done (the first judgment) with those talents. These days most people are burying them under the ground (the unconscious) because they are afraid that they won’t measure up to “perfection” (10). But it also means that they are afraid of Judgment Day, so they try to prolong life, without contributing to it.

Are you a Sheep or a Goat?

The Sheep and the Goats

“When the Son of Man comes in his glory, and all the angels with him, he will sit on his throne in heavenly glory. All the nations will be gathered before him, and he will separate the people one from another as a shepherd separates the sheep from the goats. He will put the sheep on his right and the goats on his left.

“Then the King will say to those on his right, ‘Come, you who are blessed by my Father: take your inheritance, the kingdom prepared for you since the creation of the world. For I was hungry and you gave me something to eat, I was thirsty and you gave me something to drink, I was a stranger and you invited me in, I needed clothes and you clothed me, I was sick and you looked after me, I was in prison and you came to visit me.’

“The King will reply, ‘I tell you the truth, whatever you did for one of the least of these brothers of mine, you did for me.’

“They also will answer, ‘Lord, when did we see you hungry or thirsty or a stranger or needing clothes or sick or in prison, and did not help you?’

“Then they will go away to eternal punishment, but the righteous to eternal life.” (Matthew 25:31-46)

And also of significance is the value 10, which also was reflected through the parables and narratives, and was contained as a double symbol within Jesus’ birth chart in the form of a five-pointed star, indicating two sets of —five physical and five spiritual — initiations. And we must not forget that 10 can be reduced to the single digit 1. To me, this shows that Jesus demonstrated the fact that he and his Father were truly one, and that he, by undergoing these initiations, became unified with his “Higher Self” in much the same way that we can today, using depth psychology: individuation.

In Divine Light and Fire, Peter Roche de Coppens discusses the purpose of the initiations. As he can attest, the inner and outer symbolism can cause confusion:

All the authentic Mysteries of the sacred traditions converge upon one central objective, which we find as well at the very heart of Christianity: Communion and then Union with God, with the Source and Essence of our Being and of Reality, of all Life, Love, and Wisdom… Thus no simple dialectical distinction can be made between the exoteric and the esoteric aspects of spirituality: For God and Christ sought esoterically and perceived within oneself, in one’s highest state of consciousness and being, lead to this “earnest and deliberate action, the insertion of the purified and ardent will into the world of things,” into the exoteric world. And within each individual life there is the inevitable drama between the exoteric and the esoteric, between being in history and yet having a transcendent being, beyond history…

It seemed that the gist of these distinctions lay in conceiving of God, the Ultimate Reality, and Source and Essence of Life, Love, and Wisdom, as to be looked for outside (the exoteric approach) or inside human nature (the esoteric approach). But God is both personal and transpersonal, the Kingdom of Heaven is both within and without, inside and outside the human being…

In this integration of apparent opposites we are able to reconcile the universality of the One “religion” (because ultimately it is the integration and synthesis of science, art, and religion) with many religions, that which emerges as unity out of diversity. This clearly points to the two central features of the new, emerging “face of religion” — that it must be fully universal and grounded in sound and “testable” metaphysics…

There are several names and images used to refer to the esoteric Christian teachings and to the way of Initiation in these Mysteries. Thus we have, for example, “The Kingdom,” “The Kingdom of God,” “The Kingdom of Heaven,” “the Narrow Path,” “The Straight Gate’” “the Saved,” “Life Eternal,” “The Second Birth,” “Life,” “A Little One,” “A Little Child,” and others. Thus, “The Little Child” was the name given to a candidate just initiated, in whom spiritual consciousness was now born and who, therefore, began to live in a completely different way, even though the external aspects of his life and earthly conditions may not have changed.

From The Gospel of Thomas, as quoted in Jung and the Lost Gospels:

His disciples said: When wilt thou appear to us and when will we behold thee? Jesus said: When you divest yourselves of your clothing without being ashamed, and take your clothes and trample them under your feet as the small children do, and step on them, then shall you behold the son of life and you shall not be frightened. (37)

4 Responses to Star: 13 – Midheaven: The Star of Heaven