Are You an Empath?

Do Androids Dream of Electric Sheep?

In 1983, I watched a video tape of Blade Runner. I was knocked out by the visionary feel that was presented in this film. What I hadn’t realized at the time was that it was based on a science fiction book by Philip K. Dick.

Bounty hunter Rick Deckard signs on to a new police mission to earn enough money to buy a live animal to replace his electric sheep, seeking greater existential fulfillment for himself and his depressed wife, Iran. The mission involves hunting down (“retiring”) a group of six Nexus-6 androids that violently went rogue and fled from Mars to Earth after their creation by the Rosen Association. Deckard visits Rosen headquarters in Seattle to confirm the validity of a question-and-answer empathy test: a method for identifying any androids posing as humans. Deckard is greeted by Rachael Rosen, who quickly fails his test. Rachael attempts to bribe Deckard into silence, but he verifies that she is indeed a Nexus-6 android used by Rosen to try to discredit the test.

Deckard soon meets a Soviet police contact, who turns out to be one of the disguised Nexus-6 renegades. Deckard retires the android, then flies off to retire his next target: Luba Luft, an opera-singing Nexus-6. This android, however, has him arrested by a police officer he has never met and detained at a police department he has never known. At this strange police station, Deckard’s worldview is shaken when an official named Garland accuses Deckard of being an android. After a series of mysterious revelations at the police station, Deckard ponders the ethical and philosophical questions his line of work raises regarding android intelligence, empathy, and what it really means to be human. Phil Resch, the station’s bounty hunter, finally gets testing equipment to determine if his coworkers as well as Deckard are androids or humans. Finally, Garland reveals that the entire station is a sham, completely staffed by androids, including Garland himself. Resch shoots Garland in the head and escapes with Deckard; together, they find and arrest the android opera singer, which Resch suddenly, brutally retires in cold blood. Although Resch and Deckard are now collaborating, each still worries that the other, or himself, might be an android. Deckard administers the empathy test to himself and Resch, which confirms that Resch is a particularly ruthless human being, and that Deckard is also human, but with empathy for androids.

Only three of the Nexus-6 android fugitives remain, and one, Pris Stratton, moves into an apartment building whose only other inhabitant is John R. Isidore, a radioactively damaged, intellectually slow human classified as a “special.” The lonely Isidore attempts to befriend her. Roy and Irmgard Baty, the final two rogue androids, visit the building, and together they all plan how to survive. Meanwhile, Deckard with his reward money buys Iran an authentic Nubian goat. After quitting work, Deckard is pulled back in after being notified of a new lead and experiencing a vision of the prophet-like Mercer confusingly telling him to proceed though his mission is immoral. Deckard calls back upon Rachael Rosen, since her own insider knowledge as an android will aid his investigation. Rachael reveals that she and Pris are the same exact model, meaning that he will have to shoot down an android that looks just like her. Rachael coaxes Deckard to have sex, after which they mutually confess their love, but she reveals she has slept with multiple other bounty hunters in order to dissuade them from their missions. After threatening to kill her, Deckard abruptly deserts her.

Isidore develops friendships with the three android fugitives, and they all watch a television program giving definitive evidence that Mercerism is a hoax. Roy Baty tells Isidore that the show was produced by androids to discredit Mercerism and blur the distinction with humans. Suddenly Deckard enters the building, with supernatural warning visions of Mercer appearing to both him and Isidore. Deckard becomes legally justified in shooting down all three androids without testing them, since they attack him first, and he successfully does so. Isidore is devastated, and Deckard is soon rewarded for a record number of Nexus-6 kills in one day. When Deckard returns home, he finds Iran grieving because Rachael Rosen recently showed up and murdered their goat.

Deckard goes to an uninhabited, obliterated region of Oregon to reflect. He climbs a hill when he is hit by falling rocks and realizes this is an experience similar to Mercer’s. Rushing back to his car, he stumbles abruptly upon a toad, an animal previously thought to be extinct, and one of the animals sacred to Mercer himself. With newfound joy, Deckard brings the toad home, where Iran quickly discovers that it is just a robot. While Deckard is unhappy, he decides that he at least prefers to know the truth: whether the toad is real or artificial, remarking with an exhausted reflection upon the events that have taken place that “The electrical things have their lives too, paltry as those lives are” [Wikipedia]

In post-apocalyptic 1992 (or, in later editions, 2021), after “World War Terminus,” the Earth’s dust-irradiated atmosphere leads the United Nations to encourage mass emigrations to off-world colonies to preserve humanity’s genetic integrity, with the incentive of free personal androids: robot servants identical to humans. On Earth, owning real live animals is a status symbol, because of mass extinctions and the accompanying cultural push for greater empathy that has motivated a technology-based religion called Mercerism. Poor people can only afford realistic-looking electric animals, including Deckard, who owns a robotic black-faced sheep. Mercerism uses “empathy boxes” to simultaneously link users to a collective virtual reality of communal suffering, centered on a martyr-like character, Wilbur Mercer, who eternally climbs up a hill while being hit with crashing stones.

The story also contains passing mention to “Penfield mood organs”, which fill the role that mind-altering drugs take in other Dick stories. The mood organ can induce any desired mood in the people nearby, such as “an optimistic business-like attitude” or “the desire to watch television, no matter what is on”. A slightly ironic passage in the opening chapter has Deckard and his wife, Iran, discussing what settings to use to start the day. She announces that she has scheduled six hours of “existential despair” for later in order to deal with their loneliness in an almost-deserted apartment building. [Wikipedia]

This ‘religion’ is an enigma, to say the least. Based upon Dick’s own past life memory as an early Christian, he shows us the sheer complexity, and yet simplicity, of how empathy works. The ’empathy boxes’ allow individuals from all over America to ‘experience’ their spiritual leader’s martyrdom, as if it were themselves that suffered the thrown stones. The empaths would receive a bloody ‘stigmata’ wherever the stones hit ‘them’.

What would surprise them was the fact that they individually felt alone, but immediately upon thinking a thought, others would chime in with their own comments. (A bit like Facebook, really.)

Even when the androids ‘proved’ that Mercerism was a fraud, the figure of Wilbur Mercer lived on in those that had experienced his ‘reality’.

The ‘shared’ virtual reality of Mercer’s journey up the mountain (all paths lead to the top) reminds me of a concept that occurred to me a couple of months ago:

If each of us are ‘recording’ our story for the official records of our lives, then when we share an experience with others (in the same place, at the same time) we build a virtual model of the experience in the Akashic Records. Edgar Cayce spoke of these records as his major resource during “Life Readings”.

This need for empathy is the driving force of the whole book. Intellectually, we can be brilliant, but if we lack feelings, we are sterile, actually. Having a pet, as I have discovered myself, is the easiest way to experience feelings for other living things, without any strings attached. In other words, Unconditional Love.

The underlying message is that we should be also feeling the same with everyone, even our ‘enemies’.

Deckard’s quandary is that he needed to be unfeeling about the androids, in order to ‘retire’ them. When he started to feel empathy for the androids he was hunting down, he suspected he might be one himself. What he overlooked was that his empathy was ‘proof’ that he was really human. The question answered itself (at least as far as I was concerned as a reader).

Science fiction has a way of taking the present and showing us where we could be heading. The overly prescribed medications that we are seeing around us and our neighbours, the legal stuff, is effectively ‘mood enhancers’. This was very evident in the 60’s (when this book was written): uppers, downers, etc. Now, it’s even worse, but, short of throwing it all away and starting again from scratch (self-grown fruit and vegetables a la What the Health) we are doomed to extinction.

Conspiracy theorists have noted for years that the government colludes with big business to ‘dupe’ us into doing what they want us to do. And if they can’t get you that way they’ll use the fall-back position of fundamental religions. 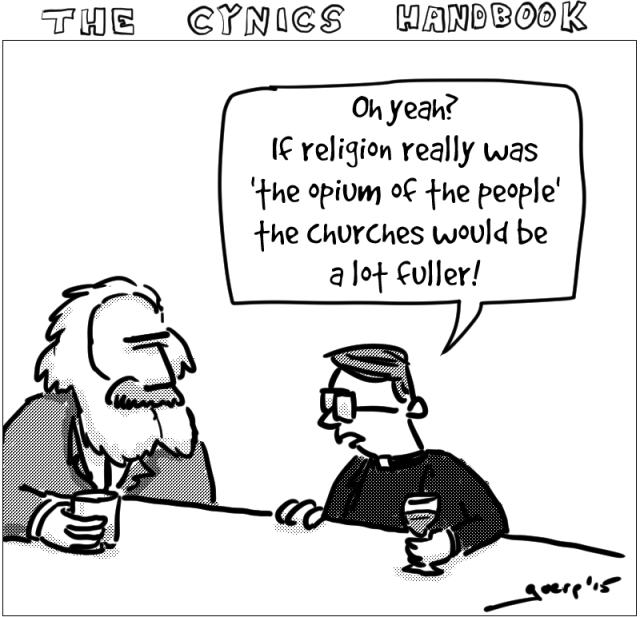 Courtesy of Marx My Words

Although the book is a glimpse into the future, the movie gave us a full-blown experience of what it could be like after a final World War. But the movie also laid the groundwork for “Back to the Future” where a ‘nicer’ version of reality was played out.

We are all still expecting that everything will work out the way it is supposed to. That’s called “Hope”. Without it, there’s no point, and that my friends is exactly the point!

I am an Astrologer who also writes about world events. My first eBook "At This Point in Time" is available through most on-line book stores. I have now serialized my second book "The Star of Bethlehem" here. And I am experimenting with birth and death charts. If you wish to contact me, or request a birth chart, send an email to cdsmiller17@gmail.com. (And, in case you are also interested, I have an extensive list of celebrity birth and death details if you wish to 'confirm' what you suspect may be a past-life experience of yours.) Bless.
View all posts by cdsmiller17 →
This entry was posted in reviews, showbusiness, spirituality and tagged AI, androids, consciousness, empathy, humanity, Mars, media, Mercerism, pets, politics, radio, religion, science fiction, television. Bookmark the permalink.