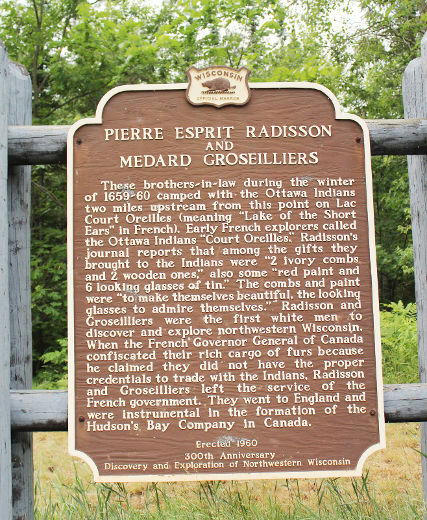 I’m reading “Voyages of Peter Esprit Radisson” again, for the first time since 1980. It takes a little while to get accustomed to the use of double letters, and mixed language words, that he wrote in his original manuscripts. But after a chapter or two, I’m back in the rhythm again.

What strikes me as remarkable is his apparent fluency in English. The words are clear, the meanings lucid; I feel as if I’m there with him.

It also made me ponder his birth date, which according to Wikipedia (and other sources) could be either 1636 or 1640. In other words, no one knows for sure.

Another WordPress author, Bite Size Canada, lists the date August 28, 1661, as significant  because it is the day that Radishes and Gooseberries, as Radisson and Groseilliers became known, decided to begin ‘their great partnership which led to the founding of the Hudson’s Bay Company.’

So I got to thinking: was the date significant because Radisson had ‘come-of-age’? Or was it just a coincidence? And would he have been 21 or 25 years of age?

Well, you must know by now that there is method to my Astrological madness: I felt that the events of 1651-52 which started Radisson’s life in New France would have taken place when he was 15-16 years of age, not 11-12, which is what he would have been had he been born in 1640. So I’ve opted for 1636. (The date of this chart is later by 10 days because of the changes to our calendar systems in the following century.) 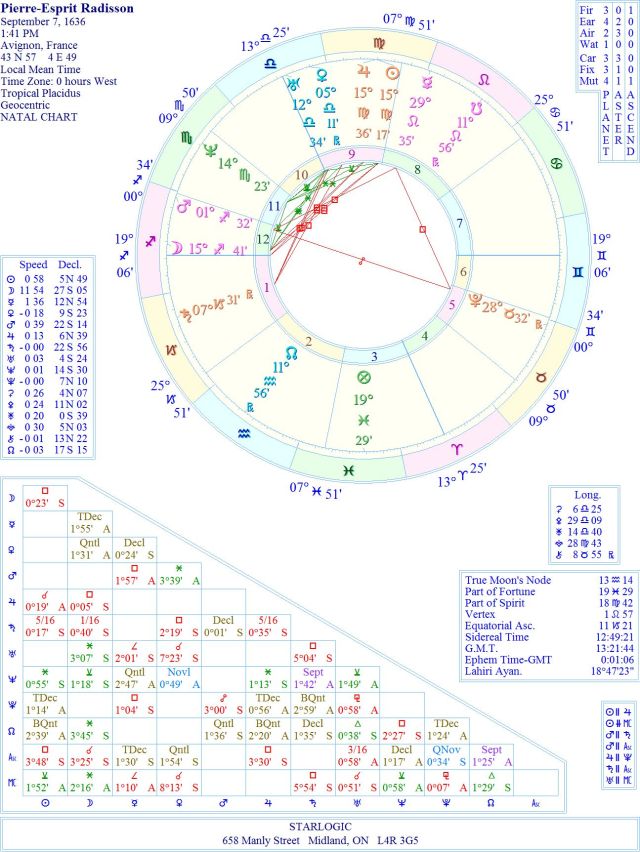 The timing of his birth has been rectified by me to demonstrate Radisson’s capture by the Iroquois when he was about 16 years of age. This is represented by Pluto in Taurus in the 5th House of his chart. It would have been a major awakening to his destiny, I feel. This position of Pluto is in a T-Square with Mercury and Mars, indicators of learning a new language, and becoming a warrior.

The position of his Moon is conjunct his Ascendant in Sagittarius: this man could not help but be an explorer. He was born to rove.

But he was also born Lucky: Jupiter and the Sun are conjunct in Virgo in the 9th House. As they say in a game of cards: “He had it in Spades.”

At one time, I imagined myself to be Radisson reincarnated. This birth chart, when compared to my own has many connections. But this could just be wishful thinking on my part.

Then, I got a mental flash a couple of days ago: to the French, Radisson and Groseilliers were just a couple of ‘chancers’ who set out to discover new territories for the fur trade, without legal permission; to the English, they provided a gateway (Hudson’s Bay) to open up the previously French-controlled New World, and help found the Hudson’s Bay Company; and to the native population, they were ‘friends/enemies’ (depending on which side of the Indian alliances they were dealing) who ushered in the wholesale takeover of their territories by Europeans.

That’s quite a lot of hats to wear, for sure.

I think I can relate to Radisson from a very deep connection: we are both misunderstood by others; we have both done things we shouldn’t have and lived to regret it; and we’ve both lived in Canada and England, with a fondness for France.

To me, Radisson is neither a hero, nor a villain. He’s just a man who was presented with an opportunity to ‘change the world’. How others judge him is not his concern. When he died, he knew he had done the best he could under the circumstances.

I would that we can all say the same.

I am an Astrologer who also writes about world events. My first eBook "At This Point in Time" is available through most on-line book stores. I have now serialized my second book "The Star of Bethlehem" here. And I am experimenting with birth and death charts. If you wish to contact me, or request a birth chart, send an email to cdsmiller17@gmail.com
View all posts by cdsmiller17 →
This entry was posted in history and tagged astrology, English, explorers, French, furtraders, HBC, native americans, native canadians. Bookmark the permalink.