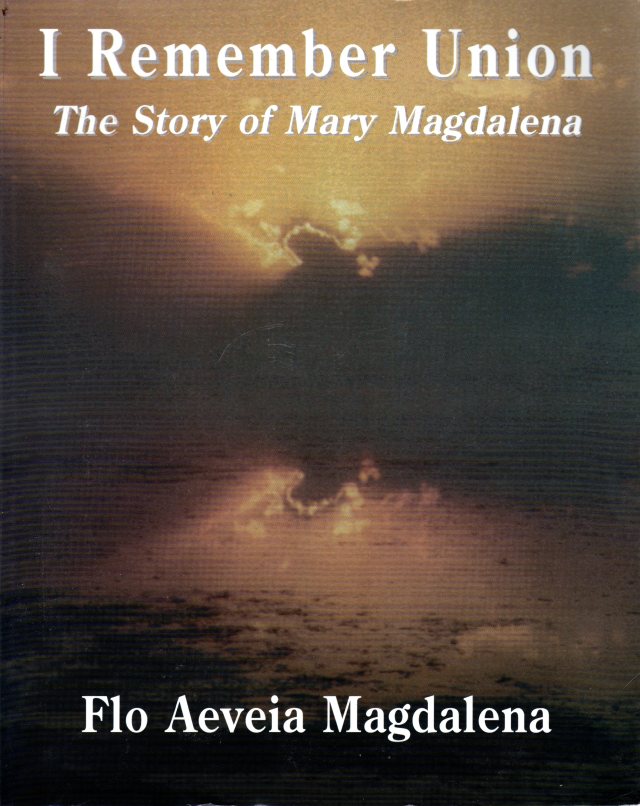 I Remember Union: The Story of Mary Magdalena

From the Preface: “I REMEMBER UNION is the story of Mary Magdalena, an endearing woman who remembers her oneness with spirit and with all things. This memory guides her to the vision of peace, which she endeavors to bring to the world.”

This book was channeled, beginning in 1989. The version I have was published in 2001 (Fourth edition) by All Worlds Publishing, Putney VT. I found it in a local Goodwill shop, a week after I finished the serialization of my manuscript The Star of Bethlehem. To me, it was confirmation of something I had been holding as a secret for almost 2000 years.

There are two Romans in this memoir: one who came to Mary under cover of darkness; the other the local head of Rome’s control in the region, Pontius Pilate.

Late that afternoon, I heard the festivities in the city below, the people becoming gayer and the noise growing louder as night approached.

Naomi was away in the town buying the food for our dinner, and so when he knocked at the door, it was I who answered.

He had removed his soldier’s cloths and wore a tunic of soft ruby color. I would not have known he was a Roman. He was handsome to me, tall and broad, with brown hair and a gentle smile which played at the corners of his eyes and lips. He smiled at me with a recognition that I felt as well, but was more hesitant to acknowledge.

He spoke first: “You are the one of Migdala, called Mary Magdalena?”

“I have come because there is a matter we must discuss. Will you speak with me now?”

He looked past me through the door, as if making certain that I was alone so that we could speak unobserved.

“Yes, I will talk with you,” I said, moving aside as he entered my home. I covered the window by the door as a sign to Naomi that I was not alone.

He studied me openly and honestly, without pretense. I did not invite him to sit, and we stood, feeling an urgency suddenly upon us.

“I lead the Roman army, Mary,” he said suddenly. “The soldiers take their orders from me.”

A shiver went through my body. “And why are you here?” I asked, sensing the answer before he said it.

“I am here because of him.”

“Oh,” I said, sitting down. I felt a sudden chill in the air and knew the chill was from my heart.

“I thought you would know who I am,” he said to me.

“I have been watching you now for many months, hoping you would come and speak to me of the matters to which we must both attend.” He paused. “And when you did not, I decided to take matters into my own hands. You know what I must do, and we must talk. You must meet me at my place of living tonight. I cannot stay here, for your safety, as you must know.”

He gave me the direction, we set the hour, and he was gone.

The Reckoning of Pontius Pilate

“You know why I have come, Pilate?” I asked.

“Yes of course, you have come to beg for the life of the man that you love. What is his name now, oh yes, the man called Christ.”

“Pilate, let us put aside our differences so that our conversation may yield us the desired results,” I said.

“Your desired results, you mean,” he snickered.

“Pilate, there is one design and one outcome, and we both know what that outcome will be and how it will appear. You and I are servants of the people and must guide them into knowledge and truth as best we can.

“Do you not understand?” he replied. “I do not care about the design. It has brought me nothing. I have made my own way. I care only for the body and the power, for this is all that will withstand the test of the people. They have long ago forgotten the truth and the way. Yes, I know of what you speak, and it is no longer real for me, for I have seen what works here, and it is not love and peace and the choice for justice.”

He became incensed, screaming at me, “It is power that assures one’s place, and I will triumph! You will see. I have power, and he does not. Of course, long after we have gone he will have power, but now, now is when the power is to be wrested from the people! Now! For now is all that matters. You will see!”

There obviously WAS a Passover Plot! The first Roman was risking his life and reputation to set the wheels in motion for it to work. If it had been known, he would have been tried for treason.

It seems that Pontius Pilate was fully aware of the plot, but wouldn’t back down on crucifying Jesus. This act was to be his ‘greatest’ achievement. He would never be forgotten: so be careful what you ask for…

So which Roman would seem to be more like me, now, in this lifetime…? Not hard to see, is it?

And what was that plot? To make sure that Jesus came down off that cross before he died, so that he could be revived.

“There is another matter which strikes us as strange. When we read the Fourth Gospel we are impressed by the recollections of the unnamed disciple of events at some of which he was present, notably towards the end of this Gospel, his being at the Last Supper, his securing Peter’s entry into the palace of the high priest, his presence at the cross, and his later accompaniment of Peter to the tomb. Why is there no mention of any of these things in the synoptic Gospels? If Mark reflects the reminiscences of Peter it would be natural that he should refer to them. It is difficult to avoid concluding that the omission in the synoptic tradition of all knowledge of the mysterious disciple was intentional.

“Events of a highly dramatic character, most important for the understanding of the life of Jesus, receive no explanation, though the circumstances clearly call for one. Two instances will suffice, both relating to Passion Week. The first concerns the triumphal entry of Jesus into Jerusalem when he sent two disciples forward to Bethany to obtain an ass which they would find tethered at the entrance to the village. The second event took place later the same week when Jesus and his disciples were at Bethany. In this case Jesus again sent two of his disciples (Luke says they were Peter and John son of Zebedee) to follow a man with a water-pot whom they would encounter at the gate of Jerusalem, who would lead them to the house where he would keep the Passover.

“These stories show Jesus making secret arrangements in advance with people whom obviously he trusted implicitly, plans which were so vital that he had not disclosed them even to his closest disciples. They involved signs of recognition. The two who were dispatched by Jesus were furnished with agreed passwords, in respect of the ass, ‘The Master needs him,’ and in the case of the owner of the house, ‘Which guestroom am I to have to eat the passover with my disciples?’ In the first incident the emissaries were to expect to he challenged with the words, ‘What are you up to, untying the ass?’ In the second they were to look out for a man with a water-pot. The signals were clear on both sides, and everything went according to plan.

“The stories, intriguing as they are with their cloak and dagger atmosphere, are straightforward and serve no theological purpose. We have no reason to doubt their truth. They throw important light on the behaviour of Jesus. But it would seem as if the sources did not wish to disclose why Jesus had turned to others than the Twelve, to others than Peter, James and John. Why could it not be told afterwards who was the owner of the ass at Bethany and the owner of the house at Jerusalem?”

Scholfield came to the conclusion that the Passover Plot failed. Jesus really did die, and the rest is history.

A Peek Into History

This book is good for getting to the reality of a relationship that quietly defies all external analysis. Jesus and Mary were in a relationship, but it wasn’t consummated.

Theirs was a spiritual union.

“I felt the enormity of the moment and what was transferred, and I gave him my feminine energy and power freely.

And the pendulum swung

and we were one.

And the most incredible revelation was that it was a part of the design.

By asking, we had received.“

I am an Astrologer who also writes about world events. My first eBook "At This Point in Time" is available through most on-line book stores. I have now serialized my second book "The Star of Bethlehem" here. And I am experimenting with birth and death charts. If you wish to contact me, or request a birth chart, send an email to cdsmiller17@gmail.com
View all posts by cdsmiller17 →
This entry was posted in history, reviews and tagged Akashic records, clairvoyance, Mary Magdalene, medium, relationships, Roman. Bookmark the permalink.

3 Responses to State of the Union: Two Roman Memories