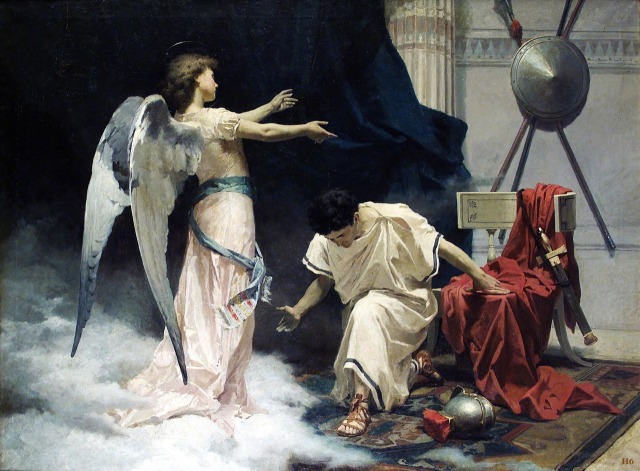 Acts 10:3 – The Angel appears to Cornelius the Centurion

Blame it on a blind spot, if you will: I had forgotten that the whole chapter of Acts 10 is devoted to Cornelius. This is the same Centurion that is mentioned at least twice in the Gospels: first as the Roman whose servant was healed by Jesus; and then as the soldier at the foot of the Cross.

His story is significant for a number of reasons, not the least is the fact that he wasn’t a disciple (how could he be?) and yet he has a direct interaction with an angel of the Lord. This makes him a Gnostic, doesn’t it?

Gentiles were considered unclean by the Jewish men who made up the early Christian Church. Peter, in a vision, is confronted by an image of beasts being let down from the heavens in “a great sheet knit at the four corners” (Acts 10:11). He is told to ‘Rise, Peter; kill, and eat.’ When he objects, a voice says, ‘What God hath cleansed, that call not thou common.’ This happens three times, an echo of the three times that Peter denied that he knew Jesus during his trial before Pilate.

As this vision ends, Cornelius’ men come knocking on his door. The synchronicity is overwhelming: Peter knows that he is supposed to go to Cornelius in Caesarea. This he does, and the interaction between the two men shows Peter that Gentiles are part of Jesus’ flock, too.

This sequence in the Gospel of John, chapter 21, is also repeated three times. It is a well-known tactic in memory recall (and a vital tool for advertisers) that something needs to be said three times before it is retained. It would seem that Simon Peter definitely needed that to happen to get him to act in the way that Jesus wanted him to.

It bears repeating here, too. We are all in this together. There is no Us and Them. We are One.

The search for my Roman life is now done.

I am an Astrologer who also writes about world events. My first eBook "At This Point in Time" is available through most on-line book stores. I have now serialized my second book "The Star of Bethlehem" here. And I am experimenting with birth and death charts. If you wish to contact me, or request a birth chart, send an email to cdsmiller17@gmail.com
View all posts by cdsmiller17 →
This entry was posted in history, spirituality and tagged Apostles, Christianity, conversion, gentiles, Gnosticism, reincarnation, spirituality. Bookmark the permalink.

1 Response to Cornelius the Centurion