It’s All a Dream

I’ve written this down first thing this morning, in order to capture the images clearly for later analysis.

The story opens with a strange setup: an elderly lady wants to leave her assets to a younger member of her family. But, for some unknown reason, they don’t want anyone else to know. (There may in fact be a potentially contested will.) But here’s where the waters get muddied. The two of them hire a total stranger to be the beneficiary of the old lady’s whole estate.

[In dreams, things don’t have to make sense. In fact, most of the time, there is no rhyme nor reason to events that unfold before your dreaming eyes. Most of the time, you feel like Sam Beckett making yet another Quantum Leap.]

Now, back to our story: in order for the scheme (read, scam) to succeed, the younger girl will have to discredit or remove the surrogate for this to work. So she sets about to do just that. Not a pretty sight!

This one involved the valuation of some musical files that needed to be taxed. I wasn’t sure what the individual was trying to achieve because she seemed to be inflating the files’ value in order to claim an improved status.

At the same time, the team leading the valuation wouldn’t accept her numbers at face value. They kept sending her report back for clarification and revision.

My role in both these scenarios was to act as an observer, an Auditor of the processes.

This brings me to the final bit. 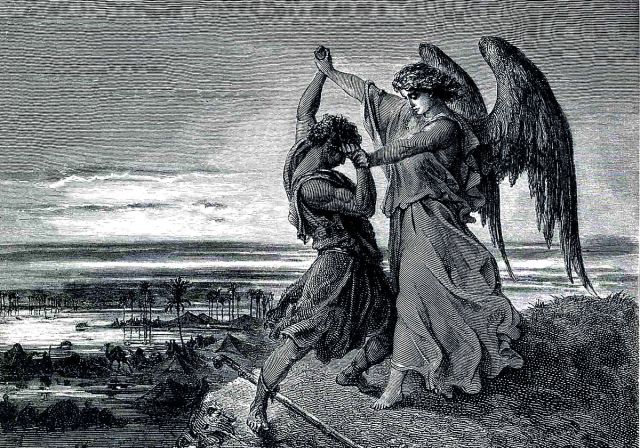 Jacob Wrestling with the Angel courtesy of Wikipedia

[The use of this image reminds me of my poem My Satanic Struggle.]

The final part of the second dream had me mopping up some spilled water at the top of a long staircase. One fellow, who lived in an apartment in the building came up the stairs and then proceeded to do a stunt fall down the whole length, as if my work had startled him. I watched this escapade with some mild irritation, and then went down the steps to remonstrate with him.

He started to wrestle with me. We were standing at the start of another down staircase, and I was concerned that he would cause me to topple over. At one point, his body was leaning at such a precarious angle that it took all of my strength to hold him in place. We held this position for what seemed an eternity.

Then the scene changed. I was being questioned by a different man. He wanted to know why he couldn’t be just like me.

I said, “Because you won’t allow yourself to be…”

With that, the drama ended.

I got to witness these events because I was an angel. It’s the only thing that makes sense. How else could I have been privy to the goings-on behind the scenes?

Humans have a habit of over-complicating their lives. We work out schemes that never take into account what consequences will ensue. Angels can only stand and stare at our ridiculousness. But once in a while they get to save their wards from destroying themselves utterly.

I am an Astrologer who also writes about world events. My first eBook "At This Point in Time" is available through most on-line book stores. I have now serialized my second book "The Star of Bethlehem" here. And I am experimenting with birth and death charts.
View all posts by cdsmiller17 →
This entry was posted in paranoia, personal and tagged accounting, bookkeeping, conspiracies, dreams, money. Bookmark the permalink.