Have We Learned Anything from History? 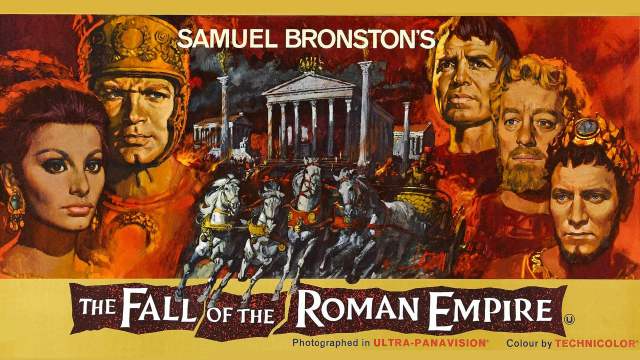 Today, in 193 AD, Pertinax, the successor to Emperor Commodus, was killed, triggering what would become known as the Year of Five Emperors. Because the United States of America is loosely based on the Roman Empire, lessons can be learned (and hopefully avoided) about the man who sits in the seat of power.

But first, we need to go back to the beginning of the ‘decline’, the birth of Commodus: 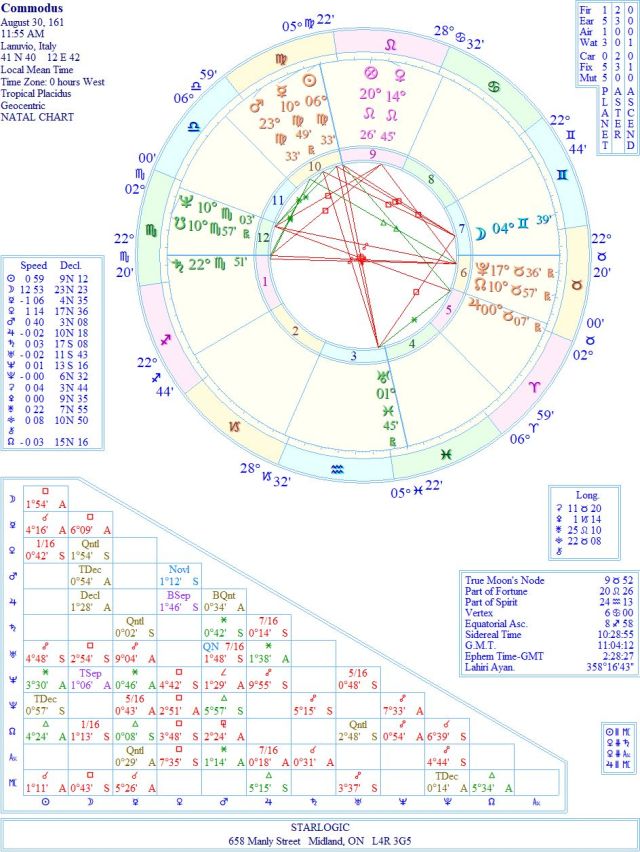 Commodus was born while his father, Marcus Aurelius, was Roman Emperor. That is why I have rectified his birth chart to the Ascendant being conjunct to Saturn. It then moves the planets into their ‘correct’ positions: Jupiter aged 16 years, Pluto aged 20 years, and the Moon aged 30 years. These ages relate to: his becoming joint ruler with his father (Jupiter); his father’s death (Pluto); and his increasing insanity (the Moon).

His Neptune in Scorpio in the 12th House shows that he was always paranoid (and a bit delusional).

This generation may be characterized by a love of the mysterious and strange. As these children grow older, the current interest in the occult and related subjects will probably continue, but they may use these energies to gain power over others, which could create very dangerous psychological forces. On the other hand, they will be more concerned with individual regeneration and techniques of healing, both psychological and physical. They will have extreme ideas, either very lax or very strict, about personal morality.

Neptune in the Twelfth House

A very sensitive person, you immediately pick up impressions from others, which allows you to get to know someone quite well, even without many words. But you should be careful of one problem. Because you are so sensitive, it is unpleasant to be around negative people whose thoughts are evil or sick. You pick up thoughts very readily, and they have a bad influence on your thinking. You have no problem with people who are trying to get away from such thoughts, but persons who are negative without realizing it can be very bad for you.

As you get older, you are likely to take an interest in religious and spiritual ideals and the supernatural. It seems to you quite obvious that there is more to this world than is apparent, and you need very much to get in touch with these hidden aspects.

Evidently, he thought he was the embodiment of Hercules…son of Jupiter.

But he went too far, so he was assassinated. 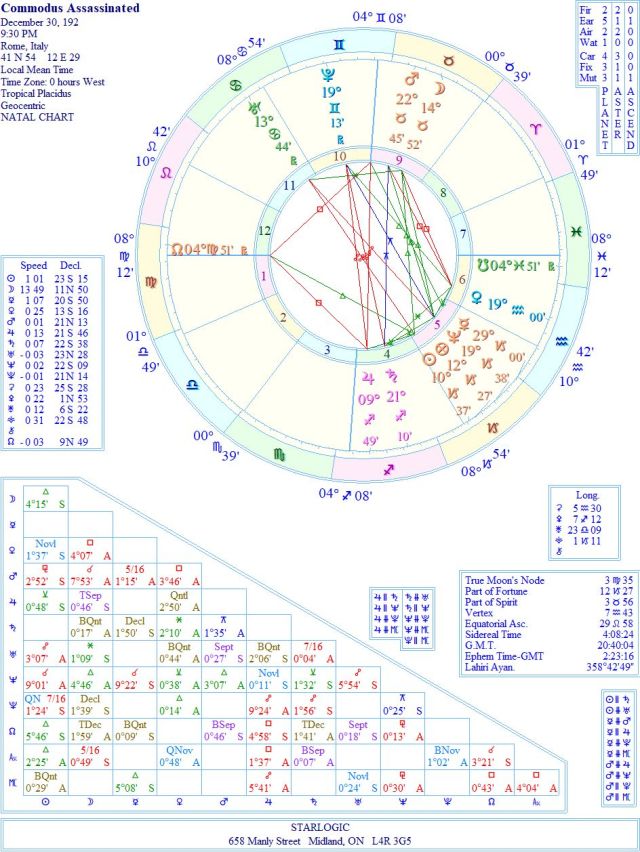 This ‘event’ chart is timed for the end of the evening, when Commodus would have taken his bath, before retiring for the night. An attempt on his life had occurred earlier in the day, but he had vomited up the poisoned meat. In the end he was strangled.

This can be a difficult aspect because it signifies a conflict between your sense of responsibility and your desire to fulfill your own needs and do what you want. This leads to a struggle within you that may keep you from acting decisively. Instead of deciding what you will do, you feel caught between these two forces, wondering whether you have the right to do what you want. You may feel that others are trying to frustrate you, but it is only your own indecisiveness that is causing the trouble. Sometimes this conflict makes you very irritable and resentful about nothing in particular. Then, when someone happens to act in a way that is obviously annoying, you focus all your built-up anger on that person.

There are no Planets in Youth descriptions for Neptune Inconjunct Pluto… 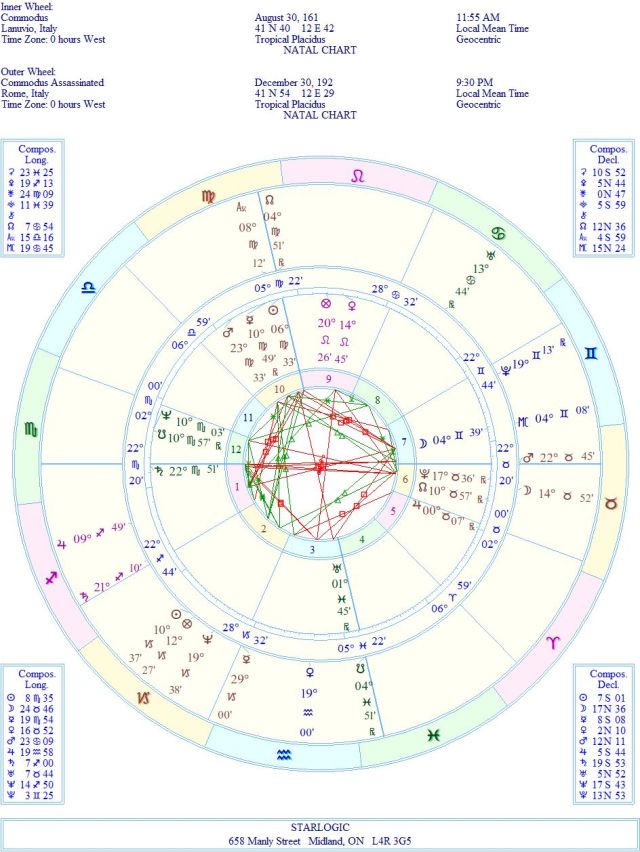 Was this ‘fated’? When comparing the charts, there are direct connections, but they seem to depend mainly on the timing of the death chart.

In today’s world, we have a similar kind of ruler: he’s paranoid about public opinion; he thinks he’s above every one else in knowledge and ‘smarts’; he thinks he’s been sent by God to sort out the world and create an era of Pax Americana. But he’s delusional…

Commodus was assassinated because he got too big for his britches. With his death, Pax Romana came to a sudden end. That’s where the warning is, for us, in the present.

Here is an analysis of the movie Gladiator which is a ‘remake’ of the Commodus story.

I am an Astrologer who also writes about world events. My first eBook "At This Point in Time" is available through most on-line book stores. I have now serialized my second book "The Star of Bethlehem" here. And I am experimenting with birth and death charts. If you wish to contact me, or request a birth chart, send an email to cdsmiller17@gmail.com
View all posts by cdsmiller17 →
This entry was posted in history and tagged assassination, astrology, Emperors, insanity, Rome, United States history. Bookmark the permalink.

1 Response to Have We Learned Anything from History?