Hidden within the soul of every person is the Truth, veiled as a mystery. Only the mystic, with the fire of love, can approach this Truth. Neptune, the god/dess of the deep, can help reach the ‘fountainhead’.

The Woman at the Well

There is a very long passage in the New Testament which can only be described as strange. So many others have pointed out that Jesus’ actions here are peculiar for a Jew in Samaria. Evidently, he had a particular reason for doing so.

The Pharisees heard that Jesus was gaining and baptizing more disciples than John, although in fact it was not Jesus who baptized, but his disciples. When the Lord learned of this, he left Judea and went back once more to Galilee.

Now he had to go through Samaria. So he came to a town in Samaria called Sychar, near the plot of ground Jacob had given to his son Joseph. Jacob’s well was there, and Jesus, tired as he was from the journey, sat down by the well. It was about the sixth hour.

When a Samaritan woman came to draw water, Jesus said to her, “Will you give me a drink?” (His disciples had gone into the town to buy food.)

Jesus answered her, “If you knew the gift of God and who it is that asks for a drink, you would have asked him and he would have given you living water.”

“Sir,” the woman said, “you have nothing to draw with and the well is deep. Where can you get this living water? Are you greater than our father Jacob, who gave us this well and drank from it himself, as did his sons and his flocks and herds?”

Jesus answered, “Everyone who drinks this water will be thirsty again, but whoever drinks the water I give will never thirst. Indeed, the water I give him will become in him a spring of water welling up to everlasting life.”

The woman said to him, “Sir, give me this water so that I won’t get thirsty and have to keep coming here to draw water.”

He told her, “Go, call your husband and come back.”

“I have no husband,” she replied.

Jesus said to her, “You are right when you say you have no husband. The fact is, you have had five husbands, and the man you now have is not your husband. What you have just said is quite true.”

“Sir,” the woman said, “I can see that you are a prophet. Our fathers worshipped on this mountain, but you Jews claim that the place where you must worship is in Jerusalem.”

The woman said, “I know that Messiah” (called Christ) “is coming. When he comes, he will explain everything to us.”

The Jesus declared, “I who speak to you am he.” 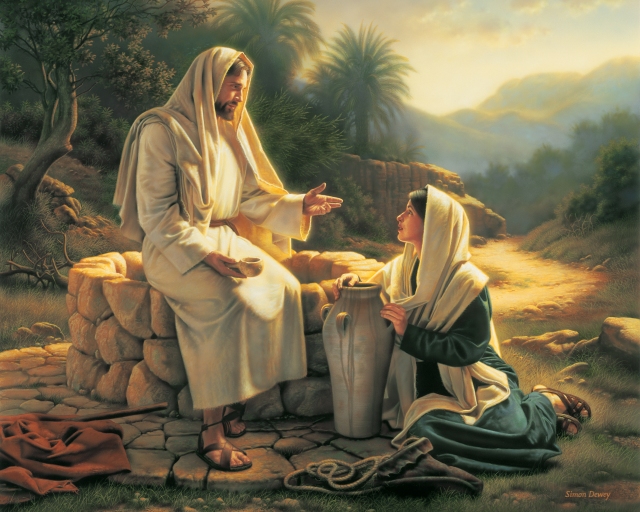 Woman at the Well

Up to this point no one else was around. Did Jesus share his story with the disciples later, or did someone ‘interview’ the Samaritan woman? Anyway, he makes a point of making the point of the story.

Just then his disciples returned and were surprised to find him talking with a woman. But no one asked,“What do you want?” or “Why are you talking with her?”

Then, leaving her water jar, the woman went back to the town and said to the people, “Come, see a man who told me everything I ever did. Could this be the Messiah?” They came out of the town and made their way toward him.

Meanwhile his disciples urged him, “Rabbi, eat something.”

But he said to them, “I have food to eat that you know nothing about.”

Then his disciples said to each other, “Could someone have brought him food?”

“My food,” said Jesus, “is to do the will of him who sent me and to finish his work. Do you not say, ‘Four months more and then the harvest?’ I tell you, open your eyes and look at the fields! They are ripe for harvest. Even now the reaper draws his wages, even now he harvests the crop of eternal life, so that the sower and the reaper may be glad together. Thus the saying ‘One sows and another reaps’ is true. I sent you to reap what you have not worked for. Others have done the hard work, and you have reaped the benefits of their labor.” (John 4:1-38)

Is this Jesus’ way of explaining how the deeds in one life can be seen to be the seeds sown for reaping by future incarnations? I believe so: his understanding of reincarnation is the basis of so much of his teachings, although he veiled the truth behind allegory and parable. Also note, the two numbers that were mentioned in this passage: 6 (the hour) and 4 (months). These add up to 10, yet again.

I’m going to now change tact by following the events of Jesus’ triumphal entry into Jerusalem.

The next day the great crowd that had come to the Feast heard that Jesus was on his way to Jerusalem. They took palm branches and went out to meet him, shouting, “Hosanna! Blessed is he who comes in the name of the Lord! Blessed is the King of Israel!”

Jesus found a young donkey {ass’ colt} and sat upon it, as Scripture says, “Do not be afraid, O Zion; see, your king is coming, seated on a donkey’s colt.”

At first his disciples did not understand all this. Only after Jesus was glorified did they realize that these had been written about him and that they had done these things to him. (John 12:12-16)

Although it is not stated in the passage above, there is a good reason why Jesus road into Jerusalem on the foal of an ass. But we’ll need to side-step into the South of France again to discover the reason.

According to David Wood, in his book Genisis, he came across an image of a donkey while searching the maps of the area around Rennes-le-Château: Admittedly this was no horse, it was a donkey or ass, but my mind was adjusting to these devious clues. Could this be suggesting the ass upon which Jesus rode into Jerusalem? It was indeed surprising when I discovered that the biblical donkey or ass could be specifically identified in French as a Jerusalem pony and even more surprising when I found the translation was Roussin d’Arcadie.

The link with Les Bergers d’Arcadie was obvious enough and we have already established the connection between the Et in Arcadia Ego theme and the argha, or container, or womb. Here Poussin again confirms, or at least contributes, to the concerto of coincidence. We now have a Roussin d’Arcadie and a Poussin d’Arcadie. But even more significant we have a color: roussin means rust-colored — red, and I remembered the old name for the Templar stronghold of Château d’Albedun, it was Rousse and it was located close to the upright or male axis of the temple, on the long axis of the cross of 14 stones! I knew of the significance of the ass in mythology and to appreciate how fine this association is becoming, we must turn to a well-known classic, The Golden Ass of Lucius Apuleius.

The story tells of a rich young nobleman, the author Lucius Apuleius, a native of Madaura, which was a Roman colony in North Africa. His parents were Greek and his father followed the respectable career of magistrate.

In the story Lucius claims to have become infatuated with a slave-girl with whom he had a tempestuous love affair. This was, however, a fringe benefit, for his main aim was to spy upon the slave-girl’s mistress, a competent witch, and in so doing learn the secret of her power. The particular skill of this lady was her ability to transform humans into animal form. Lucius aspired to spend a short time as an owl, but because of a technical hitch became an ass, in which form he remained for a year. The text then relates his adventures in the animal form and, with few exceptions, these need not concern us. However, certain aspects of the story and the life of Lucius are relevant to our inquiry. For instance:

The ass, as the Goddess Isis herself reminded Lucius at Cenchreae, was the most hateful to her of all beasts in existence, — but she did not account for her aversion.

The explanation for her hatred is quite simple, for the ass was identified with, and sacred to, the god Set who was responsible for the death of her husband, Osiris. At that time the ass represented lust, cruelty and wickedness and, according to Plutarch, not only rustic-colored asses, but also men with sandy-red hair were sacrificed as judicial compensation for the murder of Osiris. We are told Lucius was initiated into the mysteries of Isis and Osiris and Aesculapius, becoming a priest in all these doctrines. The links with Rennes-le-Château were becoming stronger for, as you will recall, all these deities are connected with our temple. The dedication of Lucius to Isis is understandable as it was she who restored him to human form and, to add to our collection of coincidences, she achieved this by arranging that she should eat ‘roses’. Lucius gave a detailed description of the goddess when she first presented herself to him, parts of which we should consider.

First was the nature of her arrival, she rose from the sea and ‘stood on the waves’. Her beauty was so great, gods would fall down for her. On her brow was a shining disc supported by ‘two vipers’ which came from the partings in her hair. About her body she wore a black mantle bedecked with stars. From her left hand hung a ‘boat-shaped’ gold dish. On her divine ‘feet’ were slippers of ‘palm’ leaves. She introduces herself:

I am Nature — the universal Mother, mistress of all the elements, primordial child of time, sovereign of all things spiritual, queen of the dead, queen also of the immortals, the single manifestation of all gods and goddesses that are.

The palm leaves signify both victory and the female labia and the golden ‘boat-shaped’ chalice also equates with the female organ. For the ass to be reviled by Isis without reason given may also be explained by the fact that in its vulgar sense is the insulting equivalent of her name, which with more discretion is referred to as her ‘seat’. Furthermore, all this symbolism is evident in the entry of Jesus into Jerusalem, and it is all feminine!

So, Jesus riding into Jerusalem on the foal of an ass is equivalent to being ruler over one’s base nature. He, a sandy-red haired man, was ready to be sacrificed. In other words, he is representing Osiris!