Between a Rock and a Hard Place

I wasn’t sure if I could find an image that could conjure up my memory from the age of twelve. This one is from England, while my adventure took place in Muskoka, Ontario.

A friend and I went on a bicycle tour of the back roads near Windermere. We found this beautiful place to explore. (Well, that’s what you do when you’re 12.)

We ditched our bikes at the base and started to climb the rock face. Since there were plenty of footholds, we managed to scale the ten metre height fairly easily. At the top, there was mostly bare rock, still on an incline, but slippery from the snow melt in early spring. 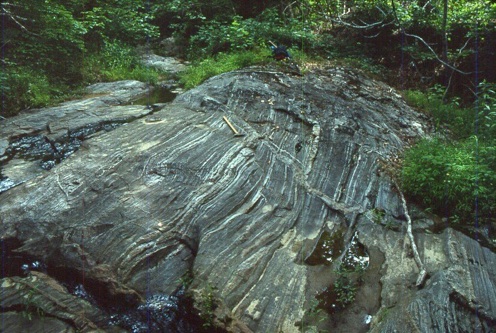 This is where I put a foot wrong: I decided it was better to walk on the moss at the side, rather than on the rock itself.

You can imagine the shock of slipping… I managed to turn over and face the precipice. Along the quick slide to the end, I grabbed on to a sapling, which gave way instantly.

I plummeted to the ground, very sure that my time on earth was up.

When I landed with a thump, I realized that I was sitting between a boulder and a log, the remainder of a fallen tree. I hadn’t died.

My friend called down, “Chris, are you alive?”

Years later, I pondered why I answered the way I did. Most people would have just said, “Yes!” My answer displays a different thought pattern: I have died before, and the feeling on the “other side” is not dissimilar to being alive. It was a feeling that I had that day.

Also, this event didn’t show up as a problem with my health until 1978, when I tried to snag a ground ball while playing a ‘pick-up’ game of baseball. My back froze, and I couldn’t straighten up.

That just goes to prove to me that Karma doesn’t have to be instantaneous: it can wait more than 15 years to show up. Painful as it might be, it will get you(r) back in the end.

I am an Astrologer who also writes about world events. My first eBook "At This Point in Time" is available through most on-line book stores. I have now serialized my second book "The Star of Bethlehem" here. And I am experimenting with birth and death charts. If you wish to contact me, or request a birth chart, send an email to cdsmiller17@gmail.com. (And, in case you are also interested, I have an extensive list of celebrity birth and death details if you wish to 'confirm' what you suspect may be a past-life experience of yours.) Bless.
View all posts by cdsmiller17 →
This entry was posted in personal and tagged accidents, afterlife, death, memories from childhood, reminders. Bookmark the permalink.