I travelled to Montreal last week to view a collection of “Billy” Stewart memorabilia in the Concordia University Vanier Library. One of the files was labelled “E.V. Stewart Photographs [1940s]”. My hope was that there might be a photo of my mother as a young woman in that file. (For those that are interested, the box number is HA3156 – P195/1B)

Turns out that specific file had two photos, just of my step-father, both marked on the back as Major E.V. Stewart. The other file of interest was one which featured photos of Anne Stewart’s marriage to Bertrand Potvin, dated 29 Aug 1949. My mother was not included in that wedding party, probably because she was three month’s pregnant with me, and she didn’t want to embarrass herself or her husband, since I wasn’t his child.

Anyway, here’s one of the photos which I had previously discovered on ancestry.ca: 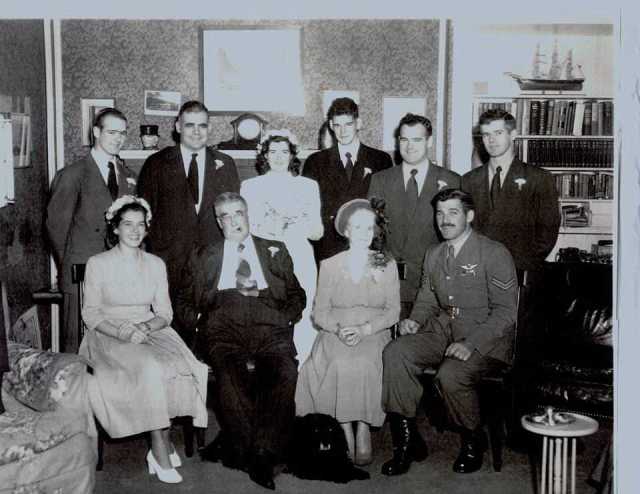 I got a photocopy of the other picture of the expanded wedding party including guests, but I’m not allowed to publish it. Vaughan is the second from the left in the back row.

I am an Astrologer who also writes about world events. My first eBook "At This Point in Time" is available through most on-line book stores. I have now serialized my second book "The Star of Bethlehem" here. And I am experimenting with birth and death charts. If you wish to contact me, or request a birth chart, send an email to cdsmiller17@gmail.com. (And, in case you are also interested, I have an extensive list of celebrity birth and death details if you wish to 'confirm' what you suspect may be a past-life experience of yours.) Bless.
View all posts by cdsmiller17 →
This entry was posted in personal and tagged family, photography, relationships, wedding. Bookmark the permalink.