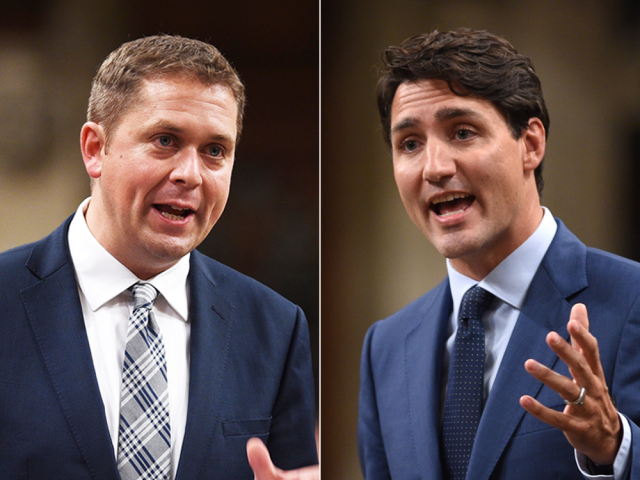 A recent spat of words has demonstrated that, when it comes to politics, nothing is sacred. Andrew Scheer has called out Justin Trudeau for calling a female protester at one of his speeches a ‘racist‘. This is rich, considering that he said very little about Maxime Bernier’s outburst about diversity.

Our 2019 General Election is a year away, but it feels like the election campaign has started already.

The Man who would be Prime Minister

Andrew Scheer has been called “Harper with a smile”: that should be warning enough. His youth and his dimples belie a “Blue Tory” attitude. If his party became the Government, he would be tougher than ever as the youngest Prime Minister since Joe Clark. In the meantime, he is looking for any political advantage in the run-up to the election.

Scheer went to London to meet with Prime Minister May, on the pretext of cementing a potential Canada-UK trade deal. It was an excuse to become better known: the Canada-UK trade negotiations were already underway.

Next, Scheer wants to go to India to fix relations with that country after Trudeau’s fiasco visit there. Again, what’s the point of the exercise? To be seen to be Prime Ministerial?

Those on the Right side of the political spectrum have always wanted to conserve the status quo. It’s only natural. Their mindset is that there’s not enough to go around. They do not understand why we must share anything with the world and his uncle.

Immigration on its own isn’t the issue: illegal immigration is what’s bothering folks. And the politics south of the border is what’s driving the numbers up. The questions that Trudeau’s heckler was shouting at him obviously hit a tender spot in his normal unflappable exterior. The media are now questioning if people (read, CSIS) around Trudeau already knew who she was and the fact that she is a known protestor and ‘agent provocateur’.

If anything, honest debate is always welcome, but a slanging match derailing a leader’s political speech is not. I’m surprised Trudeau took the bait, but maybe Bernier’s tweets were on his mind.

In Doctor Zhivago one of the characters discussed the usefulness of having a clearly defined minority to focus a country’s attention on. And the smaller the group, the better. In the story, they were in fact discussing the Jewish people in Russia, after the Great War. Hitler took the same maneuver out of that playbook in the 1930’s when he took power in Germany. Look where that led.

Muslims are now the world’s whipping boys. ISIS has seen to that. And the political leaders of all stripes, but mostly the Alt Right, have sent out the call to unite against this alien horde. (History repeats itself, until the lessons are learned.)

Must I say it yet again? We are ALL in this together. And none of us are getting out alive, until we recognize ourselves in our neighbours. They, too, are human beings.

I am an Astrologer who also writes about world events. My first eBook "At This Point in Time" is available through most on-line book stores. I have now serialized my second book "The Star of Bethlehem" here. And I am experimenting with birth and death charts. If you wish to contact me, or request a birth chart, send an email to cdsmiller17@gmail.com. (And, in case you are also interested, I have an extensive list of celebrity birth and death details if you wish to 'confirm' what you suspect may be a past-life experience of yours.) Bless.
View all posts by cdsmiller17 →
This entry was posted in history, paranoia and tagged Canada, immigration, politics, Prime Minister, racism, Scheer, Trudeau. Bookmark the permalink.