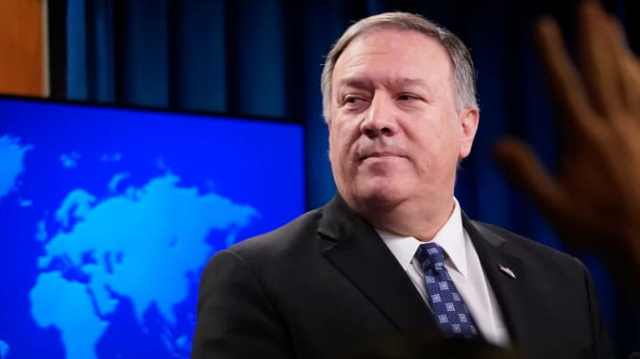 He says that Mary Louise Kelly Lied to Him Twice.

What? A politician claiming that a seasoned journalist lied to him? Pot-kettle-black…

My cousin, John Miller, writing as The Journalism Doctor, has something to say about it.

Mary Louise Kelly has been a journalist for 25 years. She anchors the American daily news show All Things Considered on National Public Radio, and usually asks tough questions but, in my opinion, fair ones. She is an experienced reporter, previously for CNN and the BBC, and has a masters degree in European studies from Cambridge University.

Mike Pompeo, the oil-rig salesman who Donald Trump made his secretary of state, has branded her as an unethical liar, part of what he calls the “unhinged” media that are out to sabotage anyone loyal to the U.S. president.

So let’s unwrap what happened when Kelly interviewed Pompeo the other day and see who’s right.

To say it did not go well is an understatement. Pompeo accused her of violating “the basic rules of decency and journalism” and lying to him twice—once by going back on an agreement to ask him only about Iran, and again by reporting on what happened “off the record” after their taped interview ended.

Friday’s interview was mostly about U.S. policy in Iran but it went off the rails as soon as Kelly asked him about Ukraine and specifically whether he defended or should have defended Marie Yovanovitch, the U.S. ambassador in Kyiv whose ouster was ordered by Trump.

Here are excerpts from the transcript of the interview, released by NPR:

MIKE POMPEO: You know, I agreed to come on your show today to talk about Iran. That’s what I intend to do. …

KELLY: I confirmed with your staff last night that I would talk about Iran and Ukraine.

POMPEO: I just don’t have anything else to say about that this morning…

KELLY: Sir, respectfully, where have you defended Marie Yovanovitch?

KELLY: Can you point me toward your remarks where you have defended Marie Yovanovitch?

Immediately after those questions, one of Pompeo’s aides concluded the interview. Pompeo stood, leaned in Kelly’s direction for several seconds, glared at her and left the room. She was then invited to follow Pompeo into an adjoining room.

Kelly said Pompeo’s staff did not stipulate that the post-interview meeting was to be off the record. “That same staffer who stopped the interview reappeared, asked me to come with her—just me, no recorder—though she did not say we were off the record, nor would I have agreed.”

What happened there was newsworthy and disturbing.

Kelly claimed Pompeo started shouting, repeatedly using the F-word. He asked her “Do you think Americans care about Ukraine?” — an incredibly insulting statement for America’s top diplomat to say of a foreign ally, one he is scheduled to visit this week.

“He asked if I could find Ukraine on a map. I said yes. He called out for his aides to bring him a map of the world with no writing, no countries marked. I pointed to Ukraine. He put the map away. He said, ‘People will hear about this,’ and then he turned and said he had things to do, and I thanked him again for his time and left.”

Pompeo, in a statement issued Saturday, did not deny shouting at Kelly and did not apologize. Instead, he said the incident is “another example of how unhinged the media has become in its quest to hurt” Trump and his administration. Pompeo, a former CIA director and Republican congressman from Kansas who is one of Trump’s closest allies in the cabinet, added: “It is no wonder that the American people distrust many in the media when they so consistently demonstrate their agenda and their absence of integrity.”

Then, in an unkind slam at Kelly, Pompeo wrote: “It is worth nothing∗ that Bangladesh is NOT Ukraine.” He appeared to be claiming that Kelly pointed to Bangladesh on the map, identifying it as Ukraine.

So what are we to make of this?

The truth is important to unravel, since Trump and his loyalists have more or less declared war on the news media, effectively sowing doubt in Republican ranks that anything written by professional reporters can be believed. That gambit serves their own interests but it is harmful to democracy.

Is Pompeo asking us to believe that he, a politician who has been interviewed countless times, does not know how to negotiate an off-the-record briefing?

Do we really think a reporter of Kelly’s experience would misidentify Bangladesh as Ukraine? The two countries are nearly 6,000 kilometres apart, and Ukraine is four times bigger and located in Europe, not Asia.

Absent any agreement on off the record, do we want to know that Pompeo insults America’s allies in private and believes that Americans do not care about Ukraine? Of course we do. Any reputable reporter would consider that newsworthy.

And by the way, why in hell does the U.S. State Department have a supply of blank maps of the world on hand? Are they used to give reporters insulting, high-school level geography quizzes to see what they know, or are they something much more significant—briefing material for a president with a short attention span, perhaps?

As for Pompeo’s touchiness on being asked about the removal of the U.S. ambassador to Ukraine, the State Department has for weeks declined repeated requests to offer any public defense of Yovanovitch. Pompeo has not spoken about why she was abruptly recalled last May, and told to be on the next plane out.

The ouster of Yovanovitch is central to the impeachment inquiry into Trump, who faces a charge that he abused his presidential power by pressuring Ukraine to investigate Democratic rival Joe Biden, using military aid to the country as leverage. Testimony showed that Trump’s allies were trying to have Yovanovitch removed from her post because they thought she might stand in the way of such an investigation.

On Sunday, Trump came to Pompeo’s defence, tweeting about whether the country needed a news organization like NPR.

You’re damn right it does.

Unlike the Trump administration, it is dogged in pursuit of the truth and it defends its employees who have unjustifiably come under attack. Nancy Barnes, NPR’s senior vice president of news, said in a statement that “Kelly has always conducted herself with the utmost integrity, and we stand behind this report.”

[∗ I suspect the word should have been “noting”, but all the media reported the same word, “nothing”.]

I am an Astrologer who also writes about world events. My first eBook "At This Point in Time" is available through most on-line book stores. I have now serialized my second book "The Star of Bethlehem" here. And I am experimenting with birth and death charts. If you wish to contact me, or request a birth chart, send an email to cdsmiller17@gmail.com
View all posts by cdsmiller17 →
This entry was posted in history, paranoia, showbusiness and tagged hidden truth, impeachment, Iran, lies, media, politics, radio, Trump, Ukraine. Bookmark the permalink.