Star: 4 – The Ascendant: The Star of the Magi

The Star may have been a conjunction between two planets. Jupiter and Saturn are symbolic of Church and State, When they come together, the Priest-King is born.

As a concept, a person’s birth chart represents the soul’s blueprint for the building of that life in the three dimensional reality of earth. The Ascendant is therefore symbolic of the individual, the goal of the personality; or as the Encyclopedia of Astrology puts it. Representing Selfhood, its primary significance is Action: Destiny in the making.

After Jesus was born in Bethlehem in Judea, during the time of King Herod, Magi from the east came to Jerusalem and asked, “Where is the one who has been born king of the Jews? We have seen his star when it rose and have come to worship him.” (Matthew 2:1)

The phrase “seen…when it rose,” an alternative to the more usual translation of “saw…in the east,” is given in the footnotes of the New International Version. It seems to me this signifies two different but connected ideas: one, that the physical image of a Star had appeared on the horizon prior to their visit; and, two, that the Magi were astrologers who had drawn up his birth chart based upon the timing of that Star’s appearance. 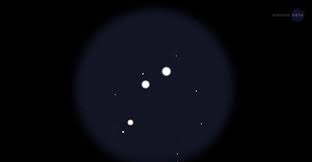 In his book, The Star of Bethlehem Mystery, David Hughes used the investigator’s process of elimination to narrow down the margin of error inherent in searching for the historical timing of an event from the past:

From our historical investigation of the time of the birth of Christ we can conclude that the second appearance of the star, which led the Magi from Jerusalem to the newborn baby Jesus at Bethlehem, occurred in 7 BC. If we consider all the possible errors inherent in this calculation we must extend the possible birth period to one between early 8 BC and late 6 BC…

One suggestion is that the star of Bethlehem was a triple conjunction of Saturn and Jupiter. These two planets, which are members of the Sun’s solar system just as our planet Earth is, occasionally appear to come together in the sky. This is a slow process: they approach each other. Usually stay together for a time and then separate. When they are together they are said to be in conjunction. On more rare occasions Saturn and Jupiter come together not once but three times, in about a year, to make a ‘triple conjunction’. One of these occurred in 7 BC, between May and December, which is exactly the time when we think Jesus was born.

Furthermore, as the year passes, the planets rise earlier and earlier in the morning and spend longer and longer in the sky until by mid-September they rise in the east as the Sun sets and then they stay in the dark sky all night, setting in the west at dawn. After September the planets are not seen to rise, for they do this in the afternoon when they are invisible on account of the daylight. They also set earlier and earlier until eventually, by March 6 BC, they set at dusk and again can hardly be seen… The 27 May 7 BC conjunction has a separation of 0.98 degrees. The planets then part, reaching a maximum separation of 2.9 degrees by about 28 July. The second conjunction occurs on 6 October and the third on 1 December, and between these two the planets only separate slightly. These conjunctions have a separation of about 0.98 and 1.05 degrees respectively and the maximum separation of the planets between these two occurs about the end of October and is only about 1.2 degrees. There is a distinct possibility that the Magi and any other astronomer of those times would simply not notice this slight parting and would conclude that there was just one conjunction during October and November, followed by a speedy separation of the planets.

In the chart I have erected, Jupiter and Saturn are still about 2° apart, but soon after they separated further and to the casual observer the “Star” would have seemed to disappear.

Libra is the balance… 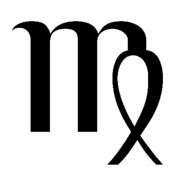 Returning to the concept of the Ascendant’s role, there is contained in the birth chart information which, correctly interpreted, can assist the individual to return to a state of equilibrium. This I believe is the kingdom of God: perfect balance, combining the qualities of goodness and evil, while existing simultaneously in heaven and Hell.

The Ascendant of Jesus’ birth chart is Libra, the Balance Scales, used to weigh the souls of the dead to see if they have lived perfect lives.

“Be perfect, therefore, as your heavenly Father is perfect.” (Matthew 5:48)

…between Virgo and Scorpio

Errol Weiner, in his book Transpersonal Astrology –– Finding the Soul’s Purpose, states that: Libra is the sign of rest for it exists in between the two conflicting signs of Virgo and Scorpio. Bringing spirit/higher consciousness into matter (Virgo) and transforming and raising up matter into spirit (Scorpio) are both labors of struggle, conflict and pain. The 4th Ray has strong rulership in Virgo and Scorpio. In between these two signs sits Libra, for its energy is that of balance itself. This does not mean that Librans (Rising or Sun) are always in a state of peace and harmony, but that these qualitative energies are available to Librans…

Venus and the 5th Ray are the outer rulers {Uranus and the 7th Ray are the inner rulers.} It is interesting to note the difference between Libra Rising and Sun Libra. Libra Rising people (when awakened) are highly intuitive and revolutionary in their thinking and activities (Uranus), whereas Libra Sun people are very logical and pragmatic, and desire traditional security in their relationships (Venus and the 5th Ray of the concrete mind)… Astrologers must therefore look to the placement of Uranus in the chart in interpreting the inner significance of Libra and the 7th house.

We will be doing just that in the next chapter, but first let us discuss this Virgo/Scorpio connection. Originally, these two signs were joined together as one, when there used to be only ten (10) signs in the Zodiac. When we look at a larger view of each of their respective glyphs, it is visible how they joined together…

4 Responses to Star: 4 – The Ascendant: The Star of the Magi