Could the Knights of the Round Table be considered Warrior Stars? The Legend of The Fisher King may be a clue to the meaning of Jesus’ Mars in Aquarius in the 5th House.

The Death of John the Baptist

We have to combine two biblical stories together which are connected by their continuing narrative.

At that time Herod the tetrarch heard reports about Jesus, and he said to his attendants, “This is John the Baptist; he has risen from the dead! That is why miraculous powers are at work in him.”

Now Herod had arrested John and bound him and put him in prison because of Herodias, his brother Philip’s wife, for John had been saying to him: “It is not lawful for you to have her.” Herod wanted to kill John, but he was afraid of the people, because they considered him to be a prophet.

On Herod’s birthday the daughter of Herodias danced for them and pleased Herod so much that he promised with an oath to give her whatever she asked. Prompted by her mother, she said, “Give me here on a platter the head of John the Baptist.” The king was distressed, but because of his oaths and his dinner guests, the ordered that her request be granted and had John beheaded in the prison. His head was brought in on a platter and given to the girl, who carried it to her mother. John’s disciples came and took his body and buried it. Then they went and told Jesus. 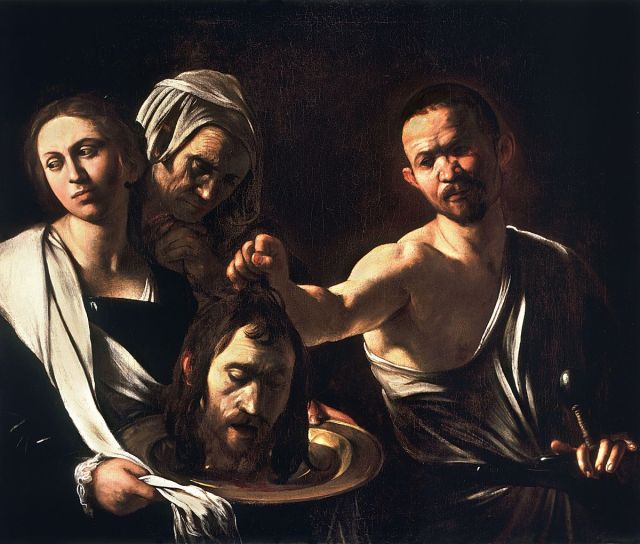 Beheading of St. John the Baptist

When Jesus heard what had happened, he withdrew by boat privately to a solitary place. Hearing of this, the crowds followed him on foot from the towns. When Jesus landed and saw a large crowd, he had compassion on them and healed the sick.

As evening approached, the disciples came to him and said, “This is a remote place, and it’s already getting late. Send the crowds away, so they can go to the villages and buy themselves food.”

Jesus replied, “They do not need to go away. You give them something to eat.”

“We have here only five loaves of bread and two fish,” they answered.

“Bring them here to me,” he said. And he directed the people to sit down on the grass. Taking the five loaves and the two fish and looking up to heaven, he gave thanks and broke the loaves. Then he gave them to the disciples, and the disciples gave them to the people. They all ate and were satisfied, and the disciples picked up twelve basketfuls of broken pieces that were left over. The number of those who ate was about five thousand men, besides women and children. (Matthew 14:1-21) 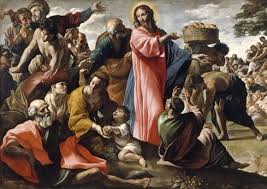 At first glance, there seems to be nothing that links these two stories, other than Jesus. But underneath the symbolism is a hidden message which needs both parts to make clear.

From Genisis: Now this is a pretty gruesome story but to my thinking it deteriorates even further when Jesus, having heard it, jumps into a ‘boat’ and goes off for a picnic. As you will recall he only happened to have five loaves and two fishes at the time, but he had five thousand others. Are these two incidents so closely linked, despite the bad taste, for no other reason than to complete the composite imagery of head, blood, salver, food in abundance and provider {as explained in the legend of Ishtar and Dumu-zi}…

{Ishtar, like Isis, had a male partner Dumu-zi; in Syria he was Tammuz and to the Greeks, Adonis. In these legends we find Ishtar as the corn-goddess and her lover, represented by the priest-king. The relationship of these lovers was an annual ritual, and their period of `love-making` continued throughout the spring and summer, at the end of which Dumu-zi dies. Ishtar broken-hearted descended, as did the planet Venus, into the underworld to search for her lover. To reach her goal she had to pass through seven gates. At each gate, since she was forced to pay a price to the keeper of the gate, she removed an item of clothing, possibly a veil. Whether one understands this as a journey or as a dance, the outcome is the same. Ishtar stands naked and pleads her case. She fails and is scorned in the underworld. Then the gods intervene and demand that Ishtar and Dumu-zi be permitted to return to the surface. Venus rises and the celebrations of spring begin — the corn seed has survived and resurrection is achieved…}

One must admit the image of a severed head on a plate awash with blood is hardly commonplace, but it also appears in the Welsh Peredur with alarming similarity. During his quest Peredur meets an old man ‘richly vested’ whose servants are fishing by a lake. This is a simple equation with the ‘Rich Fisher’ in the Graal stories. In Parzival the king was Amfortas, the maimed king, and the nature of his injury can only be in keeping with other ‘occult’ woundings of which we are now aware. Peredur’s old man was described as being lame, so we are still on course. 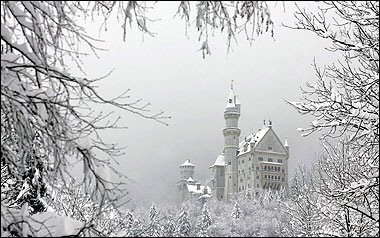 As in Parzival, the castle of the Fisher King/old man is near to another castle where the incident to which I would refer occurred: two youths entered the hall of the castle bearing a mighty spear from which ‘poured torrents of blood’. They were followed by two maidens carrying a large salver whereupon there was a man’s head — ‘swimming in blood’. The representation of females being the ‘keepers’ — if this indeed is a Grail image — is not uncommon. It was usual practice to keep consecrated elements in a ‘dove-shaped’ repository and in the Book of the Holy Grail a sacred Host is placed in the custody of an unchaste woman…

As different as all these stories appear to be, they are the same, we have only to identify the equivalents.

The MAIDEN Salome dancing before the KING is suggestive of a SEXUAL act. (Remember it was not his daughter.) The HEAD which was floating in BLOOD was requested not by Salome but by her MOTHER, who was an ADULTRESS. The head was presented in a charger, the shape of which was insufficiently suggestive of the genitals to be identifiable, and it is for this reason we are told Jesus immediately gets into a ship or boat, which is of course a proven symbol of the female pudenda. 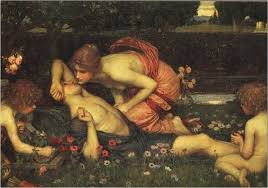 The Awakening of Adonis

It can be readily appreciated from the text that there is no good reason for Jesus to have used a boat at all. Jesus was then confronted with the task of PROVIDING FOOD for the multitude… Why loaves, why fishes and why particularly 5 and 2?

With the secret number of Isis, her active multiplication factor, the equation becomes quite simple. Loaves of bread, as you will recall from the Ishtar–Tammuz rites, are phallic symbols, so 5 x 18 = 90 and 90 signifies phallic erection. Fish is associated with the vagina and 2 x 18 = 36; 36 represents the pentagram and the circle, the female and her generative organ.

Next, it is interesting to observe that 36 x 90 = 3240 which is 18 x 18 x 10 or 18 x 180, and we must not forget that it was 5,000 men who were fed… Now why someone would decide to count only the men in a situation such as this I have no idea — in fact the statement is ridiculous unless 5000 is being given to us for a different reason. In the text we are also shown the number 12 as remaining number of baskets. Could this be merely reminding us to use inch measure?

Apparently this is so for 5000 – 3240 = 1760 and for those unfortunate people who only live in a metric world, there are 1760 yds in one mile. Furthermore, if we divide 3240 by 12 we have the number of the pregnant womb – 270. It seems we may have got this right! However, to return to the symbols: in the Grail story we find MAIDENs carrying the HEAD swimming in BLOOD, which in other versions has been shown to be providing food for the knights. The maimed, injured or de-phallused KING was the FISHER king and so on. 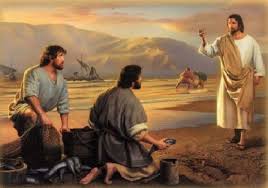 It’s not a great stretch of the imagination to make the leap from Fisher-King to Fisher-Men:

As Jesus was walking beside the Sea of Galilee, he saw two brothers, Simon called Peter and his brother Andrew. They were casting a net into the lake, for they were fishermen. “Come, follow me,” Jesus said, “and I will make you fishers of men.” At once they left their nets and followed him. (Matthew 4:18-20)

The knights of Arthur’s Round Table were forerunners of the notion of “romantic’ love, i.e. love without sexual intercourse. For, according to the authors of Love and Sexuality: Intense involvement feels very claustrophobic to the person with Mars in Aquarius. They have a detached and intellectual attitude to sexuality and have difficulty handling emotional situations… Very cool and impersonal, these people will fight to the death for a cause they believe in, but find it very hard to deal with intimate personal issues… Their need for friendship is much stronger than their need for physical contact so it is of much more significance to them that their partner shares their interests and ideals than their bed. Fighting for a cause stimulates their sexuality and they are likely to be attracted to those who fight alongside them.

He replied, “Who is my mother, and who are my brothers?” Pointing to his disciples, he said, “Here are my mother and my brothers. For whoever does the will of my Father in heaven is my brother and sister and mother.” (Matthew 12:46-49) 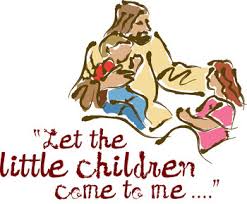 But here we have yet another contradiction when we consider the fact that Jesus’ Mars is domiciled in the fifth house. According to Love & Sexuality: People with Mars in the fifth put a lot of energy into pleasure and play… They tend to be attracted to those who are artistic, creative and entertaining… Children are very important to this person and they will give a lot of time and energy to them, especially playing with them and entertaining them.

Then little children were brought to Jesus for him to place his hands on them and pray for them. But the disciples rebuked those who brought them.

Jesus said, “Let the little children come to me, and do not hinder them, for the kingdom of heaven belongs to such as these.” (Matthew 19:13-14)

Mars energy, put to good use, creates a situation similar to the actions of physics, chemistry and alchemy upon matter: its higher octave is Pluto, which can cause a transformation of the innocent child to the wise adult, and is the subject of our next chapter.