As an end of the world prediction, this one gained a lot of traction, especially in the time leading up to December 21, 2012.

In much the same way as our own calendar ends every year on December 31, a new calendar starts the next day, in a new year.

“The Mayans, and many other ancient peoples, were fascinated by the planet Venus, whose movements form the most accurate clock in the heavens. As Venus orbits closer to the sun and faster than Earth it will pass Earth so that a line can be drawn through the Sun and both planets. If Venus and Earth are on the same side of the Sun this is called an inferior conjunction; if on opposite sides it is a superior conjunction. Either way, the next one will be 583.9 days later, and both planets will be exactly 216 degrees around in their orbits. This is called a synodic cycle. Note that 216 is three times 72, and five times 72 is 360 degrees, a complete circle. A series of five of these cycles takes 7.99 years. A diagram showing the orbits with lines going out from the sun at the conjunctions will have five lines each exactly 72 degrees from the next. If you then draw exterior lines connecting the points of intersection with Earth’s orbit, you will have a regular pentagon like the one in Washington, D.C. the latest addition to the sacred geometry of that city. Draw internal lines from point to point and you have that most powerful of magic symbols, the pentagram, or five pointed star. Note that the ancient Egyptians portrayed stars as having five points, and the human body has five major projections: a head, two arms, and two legs. Here is embodied the key idea of astrology, the connection between us and the stars. As above, so below.” (From “This Age Ends in 2012 on the Winter Solstice” by DDIG on WordPress) 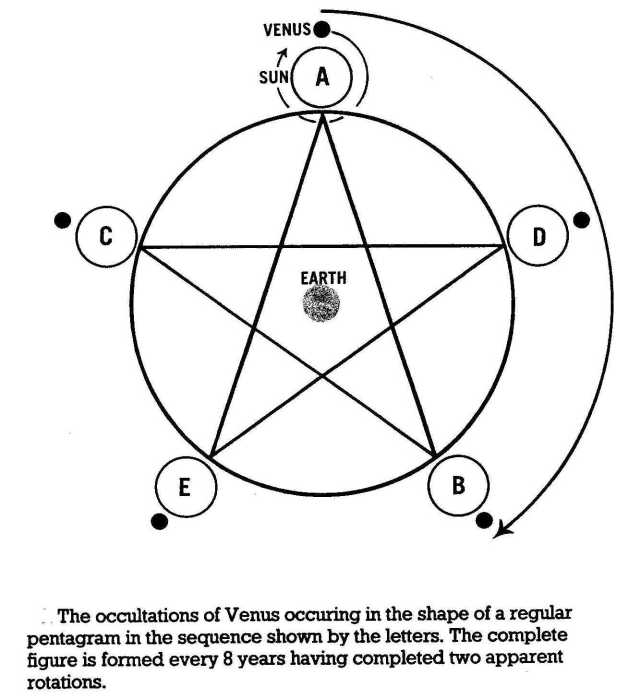 However, you will notice that Venus in the chart above is at 6° Sagittarius 35′. Does that mean that the timing is wrong, or is it just us that is wrong, again?

The criteria of Venus coming out from behind the Sun isn’t even approximately met until December 21, 2049, when the close connection will still be 3 degrees apart! So much for the end of the world scenario…

There is a Yod in the chart above. Jupiter is inconjunct with Saturn and Pluto. Let’s examine what that means (using text from Planets in Youth by Robert Hand).

This aspect may signify great restlessness and unease, so that it is difficult for you to achieve a state of balance or feel calm and at ease. Often you have contradictory impulses; you want to plunge ahead into some relatively risky activity, but you are held back by feelings of caution or inhibition. It is often difficult to decide whether you want to act on your own or in a situation that is very structured and regulated. If your situation is too structured, you will feel closed in and repressed; you will want to break free and go off by yourself and do things your way. But when you get the freedom, you feel rather lost and at loose ends, and you find it difficult to set your own pace.

This signifies that you are able to grow and experience change in your life in an orderly way, without the periods of total chaos and disruption that some people go through when circumstances demand change. It also means that you can endure hard times and emerge in good shape. Even if you feel as though you cannot hold out much longer during some difficulty, you will survive and be better off than most.

You have a great deal of creative power, and the major challenge of your life will be learning how to handle it. First of all, you must realize that you will get the most out of life if you direct your energies toward helping people around you and those you love. You will want to change many conditions in the world, which is fine as long as your reasons are not purely selfish ones.

Even at best you will get a certain amount of resistance from others, because they will feel your power and be afraid of your motives. Unless you show them that your motives are good and that you can be reasoned with, you will run into opponents who are more powerful than you, who will stop you and make your efforts futile.

In some ways, the prediction DID come true: the old way of doing things is coming to an end, and a new consciousness is rising up spontaneously with the majority of people. Now, if only we could get our governments to pay attention…

I am an Astrologer who also writes about world events. My first eBook "At This Point in Time" is available through most on-line book stores. I have now serialized my second book "The Star of Bethlehem" here. And I am experimenting with birth and death charts. If you wish to contact me, or request a birth chart, send an email to cdsmiller17@gmail.com
View all posts by cdsmiller17 →
This entry was posted in history and tagged astrology, calendars, doomsday, predictions, solstice, winter. Bookmark the permalink.