Mass Sighting of a UFO over China

This event was referenced by Shirley MacLaine in her book, Sage-ing While Age-ing. Her description had one small error, though: she said it was on April 24, 1981. I’ll bet her notes wrote a 7 with a crossed line, like most Europeans do. That makes it look like a 4.

“There was an almost mythical drama occurring on our plane of reality that was an evolution of a species joining, a repopulation of the Earth that would survive the environmental collapse we insisted on being blind to. A paradigm shift in consciousness would occur whether we realized it or not, only to announce the end of the exclusively empirical, rationalistic way of experiencing reality. We would then live in a universe different from the one we had been taught to believe in.

“The United States leads in sheer numbers of UFO abductions, followed by England and Brazil, Argentina, Australia, Bolivia, Canada, Chile, Finland, France, Poland, South Africa, the Soviet Union, Spain, Uruguay, and West Germany (not necessarily in that order). China boasts the largest number of people who witnessed a single . . . on April 24, 1981, one million Chinese a spiral-shaped UFO at the same time. There were no follow-up questions from the government or their media. Most of the UFO sightings are cloaked in secrecy or presented with disinformation.”

I’m being led bit by bit to a spiritual truth. Can a mass sighting of a UFO be considered the Second Coming of Christ? I’m at a loss as to how this could not have been understood before. We keep waiting for a future event, when it may have already happened to China in 1981. Let me explain why…

The ‘event’ chart above has an ‘exact’ Jupiter-Saturn conjunction. It’s the first time I’ve noticed this aspect that echoes the Star of Bethlehem birth chart of Jesus. They are at his birth Ascendant of 5º Libra. And they are both inconjunct the Moon. This could be significant. The 6 B.C. event was ‘recognized’ as his star rising in the East. And now his ascending ‘light’ is seen in the sky, at night, in the Far East. See what I mean by an echo. 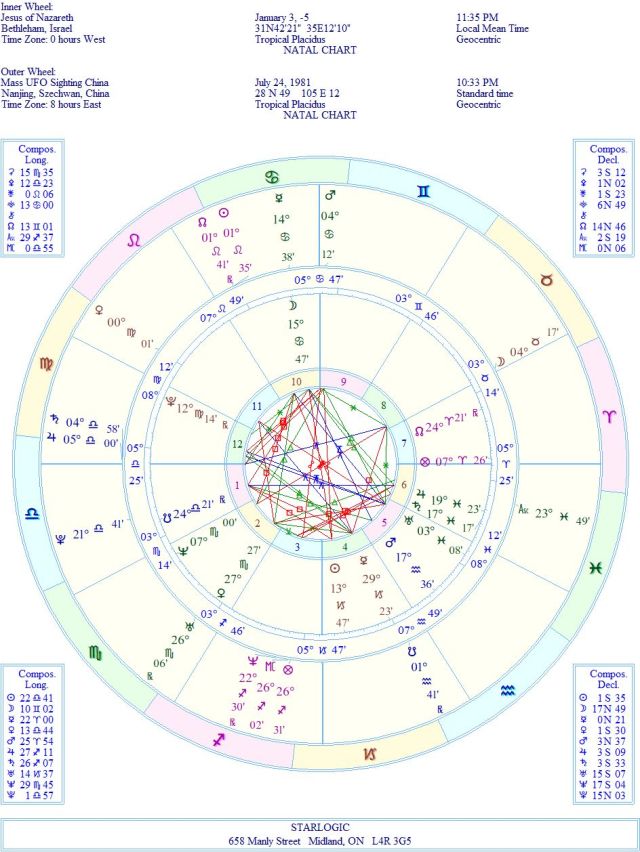 This is not an “accident”: this is a Cosmic cycle coming around again…

Two months later, Fountain International was instituted by Colin Bloy. It all fits.

I am an Astrologer who also writes about world events. My first eBook "At This Point in Time" is available through most on-line book stores. I have now serialized my second book "The Star of Bethlehem" here. And I am experimenting with birth and death charts. If you wish to contact me, or request a birth chart, send an email to cdsmiller17@gmail.com. (And, in case you are also interested, I have an extensive list of celebrity birth and death details if you wish to 'confirm' what you suspect may be a past-life experience of yours.) Bless.
View all posts by cdsmiller17 →
This entry was posted in history, paranoia and tagged aliens, China, close encounters, Extraterrestial, UFO sighting, UFOs. Bookmark the permalink.

1 Response to Mass Sighting of a UFO over China