On this day in 1981, John Hinckley tried to kill the 40th President of the United States.

“Hinckley was reported to have been driven by an obsessive fixation on actress Jodie Foster. He was found not guilty by reason of insanity and remained under institutional psychiatric care until September 10, 2016. Public outcry over the verdict led to the Insanity Defense Reform Act of 1984, which altered the rules for consideration of mental illness of defendants in Federal Criminal Court proceedings in the United States” (Wikipedia)

I’ve always wondered if that was true about Hinckley’s motivation. 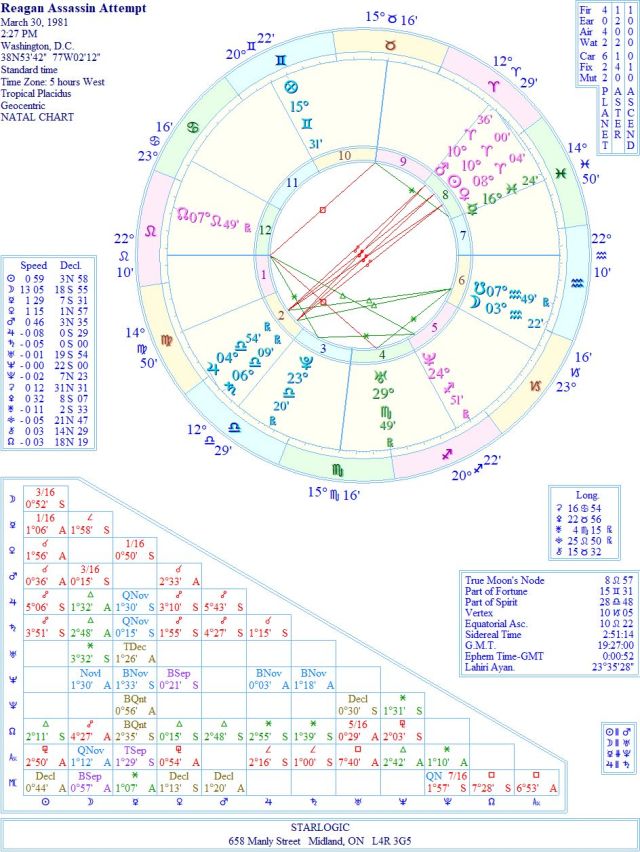 So, what can we see immediately? There was no hidden agenda, as such, because there are no inconjuncts in this chart. How this may have manifested unconsciously is tied up in the obvious aspects between the retrograde Jupiter/Saturn conjunction in Libra and the Sun/Venus/Mars conjunction in Aries.

When people say that there is nothing ‘real’ about astrology, they forget that its effects are not direct, but reflective. “As Above, So Below.”

Taxi Driver is a very violent film. It came out in the middle of the 70’s. The 70’s was a decade when films turned very violent, very, very violent, indeed. Hinckley was affected by this film, because he identified with its anti-hero, Travis Bickle.

Travis Bickle is an ex-Marine and Vietnam War veteran living in New York City. As he suffers from insomnia, he spends his time working as a taxi driver at night, watching porn movies at seedy cinemas during the day, or thinking about how the world, New York in particular, has deteriorated into a cesspool. He’s a loner who has strong opinions about what is right and wrong with mankind. For him, the one bright spot in New York humanity is Betsy, a worker on the presidential nomination campaign of Senator Charles Palantine. He becomes obsessed with her. After an incident with her, he believes he has to do whatever he needs to make the world a better place in his opinion. One of his priorities is to be the savior for Iris, a twelve-year-old runaway and prostitute who he believes wants out of the profession and under the thumb of her pimp and lover Matthew. (Storyline from IMDb)

On every street in every city, there’s a nobody who dreams of being a somebody…

If you were a sidelined Vietnam veteran would you have done the same?

That’s the energy of the Sun and Mars exactly conjunct in Aries.

* The spiral UFO over China and the Birth of Fountain happened during this year.

I am an Astrologer who also writes about world events. My first eBook "At This Point in Time" is available through most on-line book stores. I have now serialized my second book "The Star of Bethlehem" here. And I am experimenting with birth and death charts. If you wish to contact me, or request a birth chart, send an email to cdsmiller17@gmail.com
View all posts by cdsmiller17 →
This entry was posted in history, paranoia and tagged assassination, astrology, films, hidden agenda, Hollywood. Bookmark the permalink.