Pierre Teilhard de Chardin, (born May 1, 1881, Sarcenat, France—died April 10, 1955, New York City, New York, U.S.), French philosopher and paleontologist known for his theory that man is evolving, mentally and socially, toward a final spiritual unity. Blending science and Christianity, he declared that the human epic resembles “nothing so much as a way of the Cross.” Various theories of his brought reservations and objections from within the Roman Catholic Church and from the Jesuit order, of which he was a member. In 1962 the Holy Office issued a monitum, or simple warning, against uncritical acceptance of his ideas. His spiritual dedication, however, was not questioned.

The Roman Catholic Church has a problem with mystics. If the mystic belongs to a monastic order, the rules of that order are considered sacrosanct, and all other ‘interests’ are secondary. Just ask St. Teresa of Ávila.

But you can’t hold a good man down, forever. Teilhard de Chardin’s writings were published after his death and we now recognize that his form of mysticism can only be described as a blending of Faith and Science. 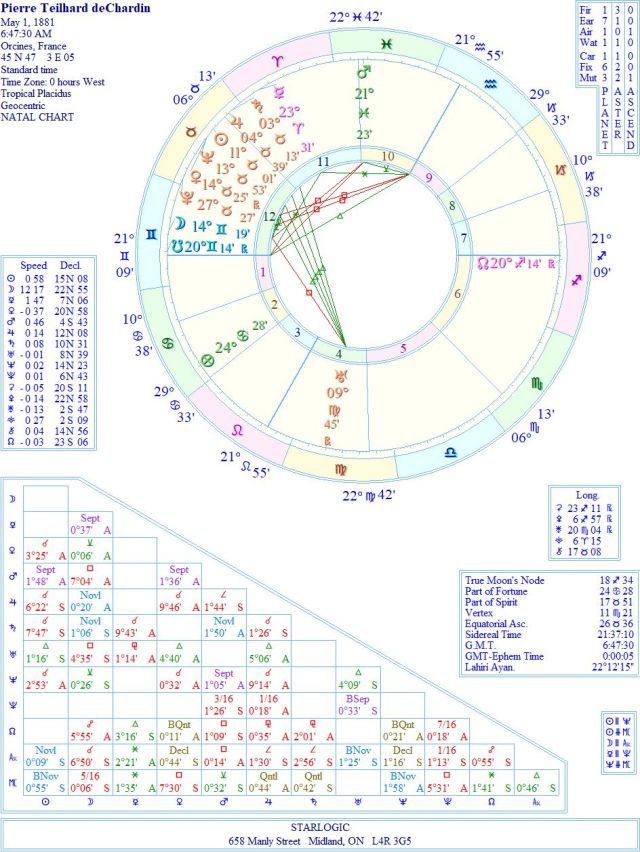 The stellium of the Sun, Neptune and Venus in Taurus in the 12th House is the first indication of his love of the hidden mysteries of nature. The fact that Saturn and Jupiter are conjunct in the same sign (but the preceding 11th House) demonstrates that he is in touch with the Christ energy, as symbolized by Jesus (who had a similar conjunction in Pisces). And having Pluto in Taurus, also in the 12th House, means that what was hidden will be revealed.

The North Node is @ 20º Sagittarius. Now, since this is opposite the Ascendant conjunct Neptune for the Fall of Montsegur Castle, I can only surmise that he chose his career (Jesuit priest) in order to find the spiritual inner path that was exemplified by the Cathars. Was he atoning for his part in the Albigensian crusade?

The keyword here is promise.For lifetimes this individual has enmeshed himself in dualities, resulting in indecision. He has tried to be all things to all people and as a result has made himself attuned to superficiality.

Now he has strong karmic lessons to learn in areas of loyalty and allegiance. Eventually he will come to see that by playing both sides against the middle he can only hope to make himself the center of the sandwich, caught in the squeeze. Nevertheless he retains a past-life fear of committing himself fully to either side for at least on the superficial level, he sees truth and right in both. He still believes that a definite commitment to one side would leave him with the feeling of missing the opportunity inherent in the other.

This ability to remain uncommitted enables him constantly to adjust himself to fit the needs of the moment. Like the chameleon his colors change with his surroundings.

This individual spends most of his time in deep thought. He likes to be left alone so that uninterrupted by others he can let his inner reflections sift through the karmic memories of all his past incarnations. This is not to say that he doesn’t like company, or that he’s even aware of what he’s doing. The fact is that he goes so deep as to become totally oblivious to anything he is thinking about! He loses himself in himself.

Always the conscious reason for going inward is based on logical intention, but the individual tends to reach the point where all logic eludes him. The Neptunian subtlety of the depths he reaches remains a mystery even to him!

I am an Astrologer who also writes about world events. My first eBook "At This Point in Time" is available through most on-line book stores. I have now serialized my second book "The Star of Bethlehem" here. And I am experimenting with birth and death charts. If you wish to contact me, or request a birth chart, send an email to cdsmiller17@gmail.com. (And, in case you are also interested, I have an extensive list of celebrity birth and death details if you wish to 'confirm' what you suspect may be a past-life experience of yours.) Bless.
View all posts by cdsmiller17 →
This entry was posted in history, spirituality and tagged astrology, inner guidance, Jesus Christ, mysticism, Roman Catholic Church, secrets. Bookmark the permalink.