What do יהוה and ΙΑΩ have in common? The sound that you make when you say them. Who says they’re not connected?

My ear has always been attuned to puns. I hear them everywhere. Why this should be, I have no idea, but it has served me well, especially when pondering spiritual truths.

If there is one thing that I have come to realize it’s that we people, who rely on English to do our thinking with, are missing out on a great deal of knowledge. Sometimes, you have to turn to original languages to really hear what’s going on.

Take for example, the Hebrew word for God, JHWH. There is a restriction placed on ever speaking that name aloud, so they substitute the name Adonai (LORD) when reading a passage that contains JHWH. Even in writing about the deity, they use G*d. Why, I used to wonder, why did they have that rule? Is it just that they didn’t want the name profaned? Or is it something else?

I remember reading something in one of the Edgar Cayce books, which I haven’t yet relocated, which explained that the way to align your mind in a transcendental way was to breathe the English vowels A, E, I, O, U in a long drawn-out way. Something like,
‘aaaaaaaaaaaaaeeeeeeeeeeeeeeeeeiiiiiiiiiiiiiiiiiooooooooooooooooouuuuuuuuuuuuuuuuu’
(You need good breathing technique to accomplish this, but practice makes perfect.)

I think that was my first clue to the mystery of JHWH’s name.

Symbolic words conceal from prying eyes
Yesterday’s truth wrapped up in parable:
Meanings which help to spiritualize
Beginners, to make life more bearable.
Of course, the intent may be to mislead,
Like in the case of the word ‘atonement’:
Insiders see clues outsiders misread;
Could be a tone meant and/or at-one-ment.

Consider, now, Jehovah’s Hebrew name,
Initialled: can you hear His Holy Breath?
Maybe the Greek equivalent’s the same:
Becomes, in fact, the birth of Life and Death
As “I am the Alpha and Omega”.
Listen to His Voice, It speaks: ΙΑΩ. 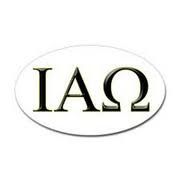 I am the Alpha and Omega

ΙΑΩ: there was something about those Greek letters that I instinctively knew to be more than just something attributed to Jesus in Revelation. Then I tried speaking them. The hair on the back of my neck stood up. I felt a tingling feeling through my skin. It was an ‘a-ha’ moment, for sure.

Have you ever heard someone doing overtone chanting? The harmonics involved are quite spectacular. But the effect on the singer (and the listener) is one of a meditative state. There are no words, just sound, so there are no consonants, only vowels. Do you see what I’m getting at?

My pun about atonement being either ‘at-one-ment’ or ‘a tone meant’, shows that even in words we use to describe experiences spiritually, the true meaning may be something we haven’t even guessed at.

A good example of that was shown in the book “Holy Blood, Holy Grail” by Michael Baigent, Richard Leigh, and Henry Lincoln. Of this, Wikipedia says:

According to the Catholic Encyclopedia, after the cycle of Grail romances was well established, late medieval writers came up with a false etymology for sangréal, an alternative name for “Holy Grail.” In Old French, san graal or san gréal means “Holy Grail” and sang réal means “royal blood”; later writers played on this pun. Since then, “Sang real” is sometimes employed to lend a medievalising air in referring to the Holy Grail. This connection with royal blood bore fruit in a modern bestseller linking many historical conspiracy theories.

Dan Brown struck literary gold when he fictionalized this same connection in the “The Da Vinci Code”.  I have always liked the idea that Jesus and Mary Magdalene were married and had children, that they moved to the South of France and established a Royal Bloodline there.

But I digress. So, what does this all mean? In my opinion, we have, at best, only a small inkling of what the larger truth is. But until we are ready to seek out that truth, we have to be content with the fairy stories that we were told in church and Sunday school.

I am an Astrologer who also writes about world events. My first eBook "At This Point in Time" is available through most on-line book stores. I have now serialized my second book "The Star of Bethlehem" here. And I am experimenting with birth and death charts. If you wish to contact me, or request a birth chart, send an email to cdsmiller17@gmail.com. (And, in case you are also interested, I have an extensive list of celebrity birth and death details if you wish to 'confirm' what you suspect may be a past-life experience of yours.) Bless.
View all posts by cdsmiller17 →
This entry was posted in manuscripts, poetry and tagged Alpha and Omega, Greek, Hebrew, Jehovah, Jesus Christ, overtone chanting, puns, spiritual poetry. Bookmark the permalink.

6 Responses to Yo! Brother…