When I first became a hypnotherapist in the late 1980’s, I was familiar with the concept of reincarnation. I had also experienced a series of ‘former’ lives under hypnotic regression in the early part of that same decade.

But it wasn’t until I read Michael Newton’s books, Journey of Souls and Destiny of Souls that I began to understand how we organize our next lives with the help of individuals from our soul groups. These individuals could be compared with a troupe of actors who travel through time together playing different roles on various world stages: a band of friends (and enemies). But note the term actor. They are not really anything more than someone’s companions through their dramas of karma.

All the world’s a stage,
And all the men and women merely players;
They have their exits and their entrances;
And one man in his time plays many parts,
His acts being seven ages.
.
(from As You Like It by William Shakespeare)
. 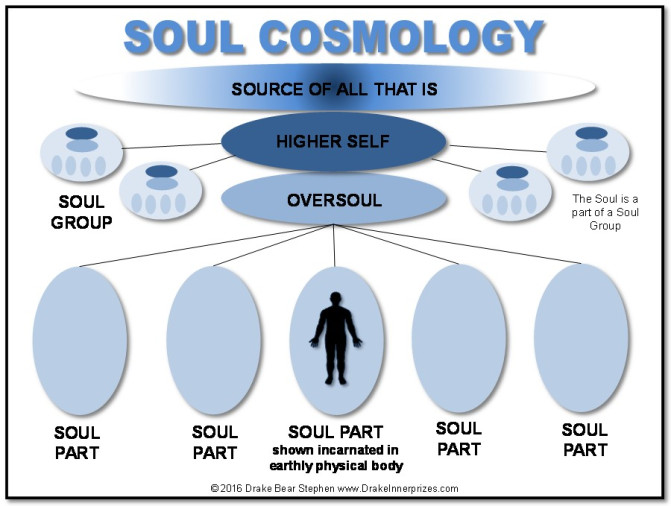 As you may have noticed in some of my previous posts, I am a fan of Jane Roberts’ Seth. And one of my favourite books is The Education of Oversoul Seven. A couple of days ago, I saw this quote on Facebook, and suddenly the penny dropped…

“One of the egos that was mine, you see, is a part of Ruburt’s whole personality, and we use this as a bridgework.”

That quote explains how Seth and Ruburt (Jane Roberts) were able to connect, and communicate, on a psychic level. It also was my a-ha moment for coming to grips with the recent interactions I’ve been having with a certain individual and her ‘present’ incarnation.

I’m not going to turn the concept of reincarnation on its head, but I am going to explain how an alternative theory may be more practical for our understanding.

Oversoul Seven grimaced at Cyprus and began the examination. “Let’s see,” he said. “In Earth terms, using an analogy, I’m a man on Wednesday and Friday, a woman on Sunday and Thursday, and I have the rest of the time off for independent study.

“Actually, because of their time concepts this is somewhat more complicated,” he said. “Each life is lived in a different, uh, area of time to which various designations are given.”

Cyprus smiled, and Seven continued. “As Lydia I’m in the twentieth century, as Josef in the seventeenth, as Ma-ah in 35,000 B.C., and as Proteus in the 23rd century, A.D…”

These are the first words from the first book that makes up The Oversoul Seven Trilogy. They form the very first concepts as presented by the stories themselves. It made sense when I read the first book, way back when, but life has a way of jumbling things up and obscuring the initial clarity.

Now, face-to-face with the idea of whether reincarnation is a fact, or not, I’m willing to say, like Seven, that ‘this is somewhat more complicated’ than that.

In much the same way that a birth chart can be read in three ways (personality, timing of events and past lifetimes), the idea that a soul can represent three connected, but separated, endeavours should be easily understood:

1) the personality (in the present);

2) the oversoul (in any time frame); and

The overarching reality of reincarnation (as viewed through the lens of the soul’s cosmology) is that any healing work that we do in the present impacts all of our lives throughout history. In other words, if you heal yourself (and your situation) in the NOW, you heal every aspect of yourself in the past, and the future.

There really is only NOW.

I am an Astrologer who also writes about world events. My first eBook "At This Point in Time" is available through most on-line book stores. I have now serialized my second book "The Star of Bethlehem" here. And I am experimenting with birth and death charts. If you wish to contact me, or request a birth chart, send an email to cdsmiller17@gmail.com. (And, in case you are also interested, I have an extensive list of celebrity birth and death details if you wish to 'confirm' what you suspect may be a past-life experience of yours.) Bless.
View all posts by cdsmiller17 →
This entry was posted in spirituality and tagged healing, karma, life after death, oversoul, reincarnation, soul mates. Bookmark the permalink.