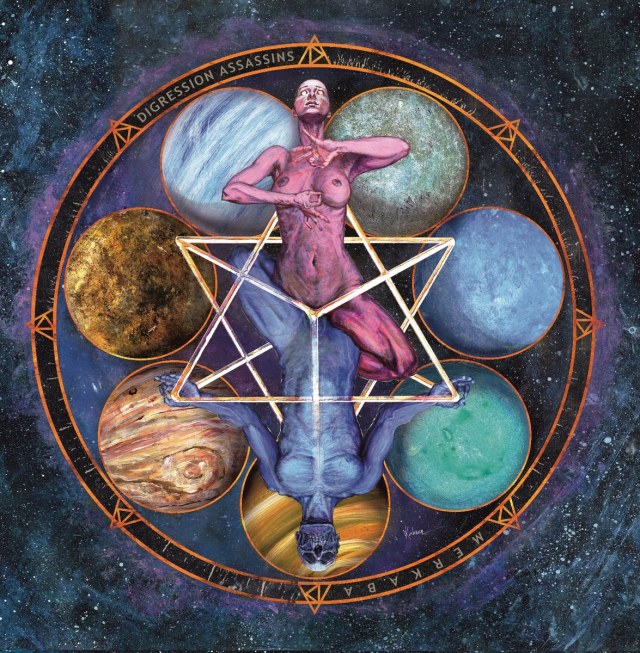 Chariot of the Gods

“Merkabah, also spelled Merkaba, is the divine light vehicle allegedly used by ascended masters to connect with and reach those in tune with the higher realms. “Mer” means Light. “Ka” means Spirit. “Ba” means Body. Mer-Ka-Ba means the spirit/body surrounded by counter-rotating fields of light, (wheels within wheels), spirals of energy as in DNA, which transports spirit/body from one dimension to another.” {Crystalinks) 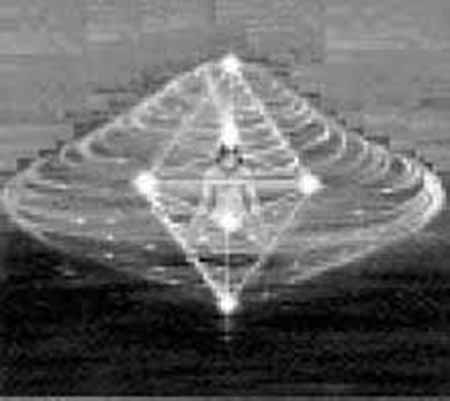 Does it not look like our concept of a UFO?

(From Crystalinks.com) According to the verses in Ezekiel and its attendant commentaries, the analogy of the Merkaba image consists of a chariot made of many angels being driven by the “Likeness of a Man.” Four angels form the basic structure of the chariot. These angels are called the “Chayot”.

The bodies of the “Chayot” are like that of a human being, but each of them had four faces, corresponding to the four directions the chariot can go (north, east south and west). The faces are that of a man, a lion, an ox (later changed to a child or cherub) and an eagle. Since there are four angels and each has four faces, there are a total of 16 faces. Each Chayot angel also has four wings.

Two of these wings spread across the length of the chariot and connected with the wings of the angel on the other side.

This created a sort of ‘box’ of wings that formed the perimeter of the chariot. With the remaining two wings, each angel covered its own body.

Below, but not attached to the feet of the “Chayot” angels are other angels that are shaped like wheels. These wheel angels, which are described as “a wheel inside of a wheel”, are called “Ophannim” – wheels, cycles or ways).

The Bible later makes mention of a third type of angel found in the Merkaba called “Seraphim” (lit. burning) angels. These angels appear like flashes of fire continuously ascending and descending.

Fixed Signs of the Zodiac

The four directions as noted in Astrology are:

Scorpio is also called the Eagle, which brings us back to the four faces as listed above. It implies that the ‘wheels within wheels’ are actually astrological patterns formed by aspects between the planets. Here is a chart which demonstrates this: 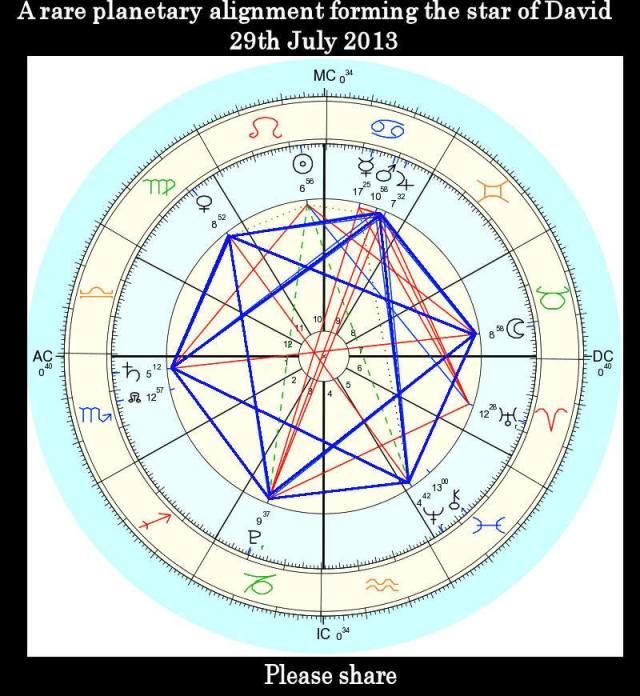 This image of interlocking triangles has been with us for a long time as the Star of David. Sometimes we need to look for hints in plain sight. Not everything is hidden.

But if you do not have the awareness, the information will remain an enigma.

We all have the ability to access our own light vehicle. In order to do so, we must reconnect with our true being. Light+Spirit+Body = Merkaba. 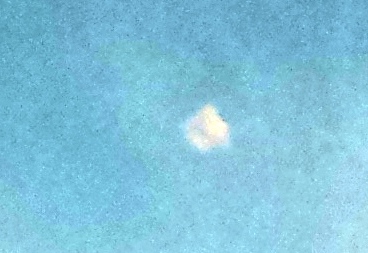 I am an Astrologer who also writes about world events. My first eBook "At This Point in Time" is available through most on-line book stores. I have now serialized my second book "The Star of Bethlehem" here. And I am experimenting with birth and death charts. If you wish to contact me, or request a birth chart, send an email to cdsmiller17@gmail.com. (And, in case you are also interested, I have an extensive list of celebrity birth and death details if you wish to 'confirm' what you suspect may be a past-life experience of yours.) Bless.
View all posts by cdsmiller17 →
This entry was posted in spirituality and tagged astrology, Bible, humanity, mysteries, mysticism, religion, sacred geometry, UFOs. Bookmark the permalink.