The Second Most Hated Man in 2000 Years

We have an obsession with ‘bad’ people. They fascinate us. They make us think about evil in human terms. They spawn conspiracy theories about escaping justice and death. The most obvious example in the last 2000 years was Pontius Pilate. Adolf Hitler runs a close second.

The reason I’m tackling this delicate matter is entirely due to YouTube making a video about this situation a recommendation for me to watch today. I did watch it, and then I thought, “What do his birth and death charts say about this?”

The planets are mostly in pairs: Sun and Mercury; Venus and Mars; Moon and Jupiter; Neptune and Pluto. This makes it difficult to read his exact character, and the legend of his own mythology comes shining to the forefront.

You would not normally expect a Libra Rising individual to be in a position of authority, making tough decisions. However, the fact that the Ascendant is opposite the Sun/Mercury conjunction could be the trigger to make him act, when things had to get done. The Mercury in Aries energy was the stronger of the two, and it could overcome the stubborn reaction of the Sun in Taurus.

His speeches were renowned for being electric: Uranus conjunct the Ascendant would give him that eloquence.

But the hidden bit would be Neptune and Pluto in Gemini in the 8th House. Pluto is inconjunct his Moon of the Moon/Jupiter conjunction in Capricorn. This means that it’s all about his emotions. The lone Saturn in Leo in the 10th House made him the Führer. 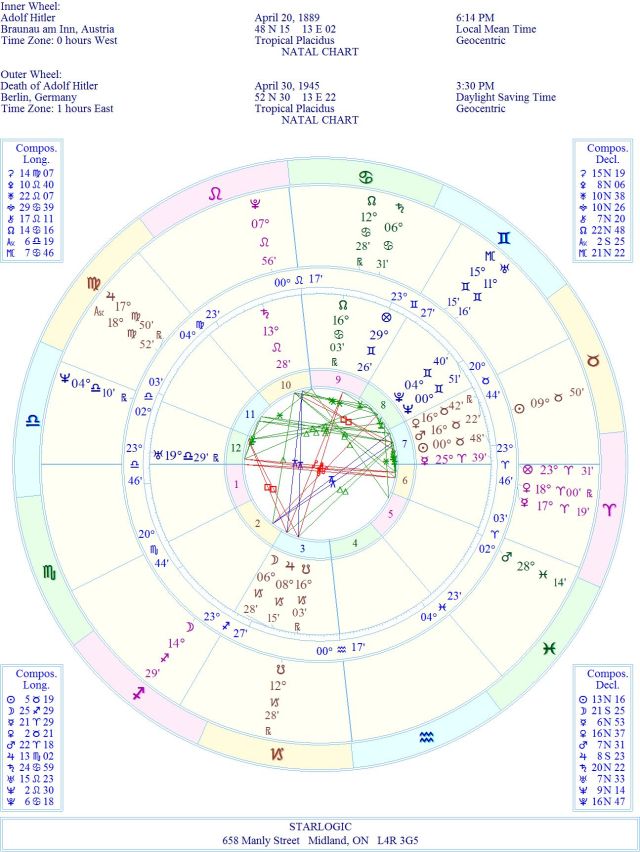 The death chart doesn’t given a definitive answer like Robin Williams’ Perfect Storm. This may be due to the fact that his decision to commit suicide may have been influenced by outside forces, namely the Soviet troops entering Berlin. But there are a couple of indicators: the Part of Fortune being in opposition to the birth chart’s Ascendant. And the death chart’s Moon is inconjunct birth chart’s Venus and Mars.

The positioning of Pluto in the birth chart is timed to about 56 years, the age he was when he and his new bride, Eva, committed suicide. So, I see this as a kind of ‘proof’.

After I posted my blog about David Wilcock being the reincarnation of Edgar Cayce I was contacted by an individual who was in touch with a unnamed person (I’ve called him John Doe) who claimed to be Adolf Hitler reincarnated. Well, that got my attention.

He gave me the birth details, and I compared Doe’s birth chart with Hitler’s death chart. It didn’t conform to the premise that I’d found with Wilcock and Cayce, so I told this man that in my opinion, John Doe may have been associated with Hitler’s final days but that I doubted he was Hitler reincarnated.

Now, because of the YouTube video, I’m revisiting this idea for the first time in years. Now I see that I had been too hasty in my analysis.

Adolf Hitler committed suicide. Edgar Cayce died. The rebirth patterns cannot conform to each other, due to the circumstances of their demise. (That’s why this work is on-going: there is so much to learn.)

Even Hitler gets to come back to continue his journey through life. As Doe he will help atone for the harm he caused to six million Jews, and many, many others. This may take a huge toll on Doe, but when his life is over, he’ll be able to go onward and upward.

If this can happen to Hitler, then there’s hope for us all.

I am an Astrologer who also writes about world events. My first eBook "At This Point in Time" is available through most on-line book stores. I have now serialized my second book "The Star of Bethlehem" here. And I am experimenting with birth and death charts.
View all posts by cdsmiller17 →
This entry was posted in history, paranoia and tagged astrology, Conspiracy Theories, Hitler, suicide, WWII. Bookmark the permalink.

2 Responses to Did Hitler Escape Death?